Motl, he who knows about such things -
[...] Of course, TEPCO has revealed that the information was a “mistake”. How did it happen? They confused the readings for cobalt and iodine. Well, that’s a pretty bad mistake for a report that is guaranteed to be reprinted at thousands of places and read or watched by a billion of people.
But the error could have been found at other layers, too. No one has done so, however: this news is so “hot” that it doesn’t really matter whether it’s true, does it? My blog has gotten immediately bombed by anti-nuclear zealots who spread the wrong number, too.
By the way, if you care about the details, it’s very likely that they just measured the concentration of iodine-134 and cobalt-56 whose half-lives are 50 minutes and 77 days, respectively. They may have interpreted the concentration of cobalt as that of iodine, but because the cobalt is decaying 2,000 times more slowly, the actual radioactivity caused by it is approximately 2,000 smaller – so 10 million gets shrunk to 5 thousand.

That allows you months of life over there without cancer.
Obviously, the people who have actively propagated the bullshit about 10 million will prefer to say to 5 thousand and 10 million is essentially the same number and nothing changes – instead of admitting that they have qualitatively screwed their job and they just generally suck. (via e-mail update)

On TV they are claiming x 10,000 above normal was the true number, the extra 3 zeroes added by mistake.
Is there any organisation not infiltrated by Al Gore types?

Motl also informs of more hockey stick chicanery uncovered (Full post here)
The summary of the story is very simple. The Briffa-Osborn 1999 reconstruction of the climate depended on a variable called “yrmxd” in a computer code. You can set it to any year and the program will cover up the whole history of your proxies before the year “yrmxd”. The variable was set to 1550 instead of the correct 1402 and the result looked like this: 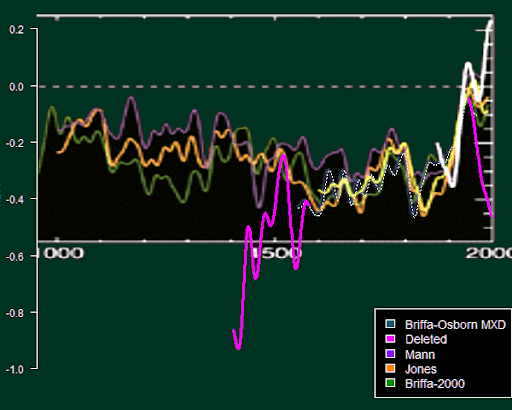 Look at the brightly shining pink lines – because both of these segments have been erased in the final paper. Those guys have censored the inconvenient decline of the temperature obtained from the trees after 1960 (they have masked the so-called “divergence problem”): this is the original “hide the decline” scandal.
But as you can see, they have also hidden a 3 times longer period, 1402-1550, which was arguably even more inconvenient because the trees indicate a faster warming in the 15th century than in the 20th century.
***************

Either Cameron knows the science on which his policy is based is fraudulent else his advisors need to be in front of judge. Either way the UK electorate is being punished due to lies, deceit and fraud.