Toxic Masks, Swabs and Injections. The Treason Against You. They've poisoned the children.

DO NOT FLY UNTIL THE VAXECUTION JABBED PILOTS HAVE FINISHED DROPPING DEAD.
[I hope those that already have were toxic persistent contrailers! About time karma came around.]
https://www.bitchute.com/video/u6ITfITUf1hJ/
.
Do people understand yet why I called for gallows to be built in Trafalgar Square?
.
They've poisoned the children. Graphene oxide causes ALL the CV19 symptoms. It's in all the vaccines, swabs, masks and chem trails.
.
How fast, and how many people can be mobilised to march on our Parliament buildings in London in order to evict and detain the scum before they can escape?
.
N-Acetyl-Cysteine is a glutathione precursor. The vid 'COVID19 is caused by Graphene Oxide' below recommends it to clean out the graphene oxide.
Get it from online retailers and health food shops before it gets outlawed by the scum.
Ivermectin does not cure coronavirus, coronavirus is exosomes, part of the immune system. IVM cleans up the antigens the PCR test looks for so it's good for getting a negative PCR test. It also neutralises spike proteins so WOW.
.

Clinching in the Breach: Matt Hancock Resigns
By Dr. Binoy Kampmark
GR June 30
https://www.globalresearch.ca/matt-hancock-resigns/5748941
Is this particularly repulsive, obsequious waste of oxygen and skin's home address known?
Then there is Whitty, under another stone somewhere. Interesting how he keep his eyes off camera as much as possible. Has he got a forked tongue?
.
.


Graphene as an adjuvant in vaccines
https://duckduckgo.com/?q=graphene+as+an+adjuvant+in+vaccines

Functionalized graphene oxide serves as a novel vaccine nano-adjuvant for robust stimulation of cellular immunity
Ligeng Xu 1, Jian Xiang, Ye Liu, Jun Xu, Yinchan Luo, Liangzhu Feng, Zhuang Liu, Rui Peng
PMID: 26814441 DOI: 10.1039/c5nr09208f
Abstract
Benefiting from their unique physicochemical properties, graphene derivatives have attracted great attention in biomedicine. In this study, we carefully engineered graphene oxide (GO) as a vaccine adjuvant for immunotherapy using urease B (Ure B) as the model antigen. Ure B is a specific antigen for Helicobacter pylori, which is a class I carcinogen for gastric cancer. Polyethylene glycol (PEG) and various types of polyethylenimine (PEI) were used as coating polymers. Compared with single-polymer modified GOs (GO-PEG and GO-PEI), certain dual-polymer modified GOs (GO-PEG-PEI) can act as a positive modulator to promote the maturation of dendritic cells (DCs) and enhance their cytokine secretion through the activation of multiple toll-like receptor (TLR) pathways while showing low toxicity. Moreover, this GO-PEG-PEI can serve as an antigen carrier to effectively shuttle antigens into DCs. These two advantages enable GO-PEG-PEI to serve as a novel vaccine adjuvant. In the subsequent in vivo experiments, compared with free Ure B and clinically used aluminum-adjuvant-based vaccine (Alum-Ure B), GO-PEG-PEI-Ure B induces stronger cellular immunity via intradermal administration, suggesting promising applications in cancer immunotherapy. Our work not only presents a novel, highly effective GO-based vaccine nano-adjuvant, but also highlights the critical roles of surface chemistry for the rational design of nano-adjuvants.
https://pubmed.ncbi.nlm.nih.gov/26814441/
GEDDIT?
.
Whilst you’ve been distracted by Hancock’s affair, PHE released a report revealing 62% of alleged Covid deaths are people who’ve been vaccinated
By The Daily Expose On June 26, 2021
https://dailyexpose.co.uk/2021/06/26/whilst-youve-been-distracted-by-hancocks-affair-phe-released-a-report-revealing-62-of-alleged-covid-deaths-are-people-whove-been-vaccinated/
"Vaccinated" as in injected with graphene oxide.
The vaccines are not vaccines. They are time delayed death.
Health Authorities Silent On Damage To Lungs Caused By Graphene In Masks
Coronavirus News April 21, 2021
Publius
[Breaking Urgent Interview with Former Chief Science Officer and VP at Pfizer, on mRNA Injections: “Governments “Lying” Because “They’re going to kill you and your family.”]
As the US divides into two camps, those who trust that perhaps despite some normal corruption in government and business – when has been any different? – health authorities are looking out for the public’s interests; and those who trust the hasty mRNA injections and Dr. Fauci about as far as they can throw them.
But on the side of those who have concluded that the government COVID response is more about breaking in populations to a future of total control, than health, the Quebec health authority has brought attention to severe lung damage which may be caused by the long-term use of some of the masks many Americans are wearing. No shrill health announcements to identify them and take them off your face and off the market immediately. As if Dr. Fauci and the health authorities just don’t care.
The Quebec health department issued a ban on masks, sold widely around the world, which contain a material called graphene. Studies have shown these nano-materials can cause cellular lung damage, perhaps the most important organ to have healthy to do well against a bout of COVID. The brand withdrawn in Canada is from China, but the material they are made from is ubiquitous, and used by many different makers.
[...]
https://coronanews123.wordpress.com/2021/04/21/canadian-health-authority-bans-many-blue-masks-over-severe-lung-damage-fauci-says-double-mask/

The occupation regime corporation and the health services along with other Common Purpose (Communist) and Freemason (Luciferian) controlled organisations have conspired to kill, maim and alter the public. You.
The bigger story is that the Black Nobility, Zionist leaders, banking families and others want the global population reduced to half a billion. The hierarchy is shown in the chart after the Daily Expose sample images.
Dr Fuellmich, a German lawyer and 999 other lawyers have formed a team to prosecute those responsible for the attempted global genocide nicknamed Nuremberg 2 for some reason.Perhaps they'll get the responsible top people this time.
Collectively, I call them satanists but basically they are power hungry savages that control armies of useful idiots in positions of authority, the Camerons and Johnsons of the world come to mind.
I made images from the online home page of the Daily Expose, one page, you'll have to visit the site to read the articles. The satanists/savages as you prefer have used chemicals, education, mass media, psychology and useful idiots to direct "the herd".
First the Daily Expose images. The images are quite large and would reach down to the carpet if I showed them full size so these are thumbnails, click for the full size, easy to read image:
Here's the link to the first story -
https://dailyexpose.co.uk/2021/06/13/stay-at-home-protect-the-nhs-give-midazolam-to-the-elderly-and-tell-you-they-are-covid-deaths/ 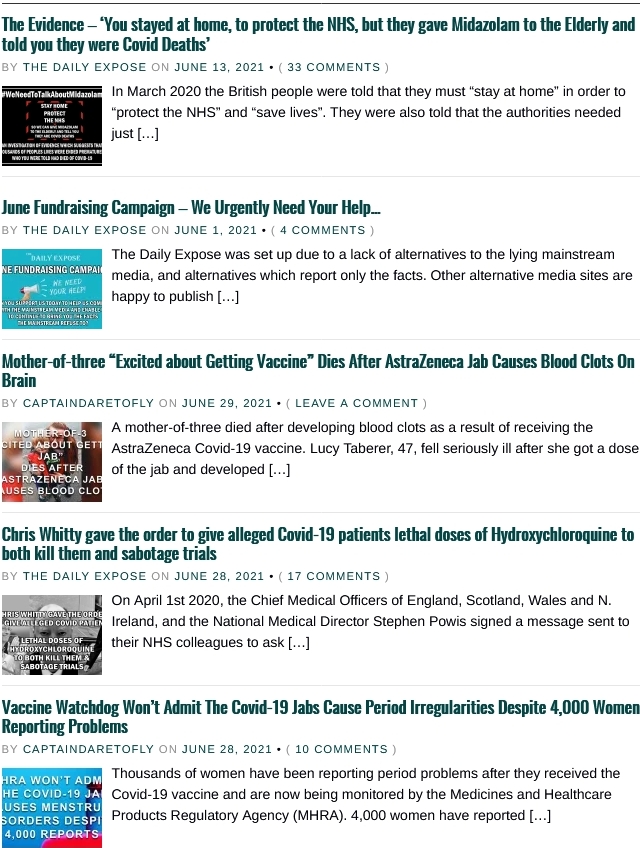 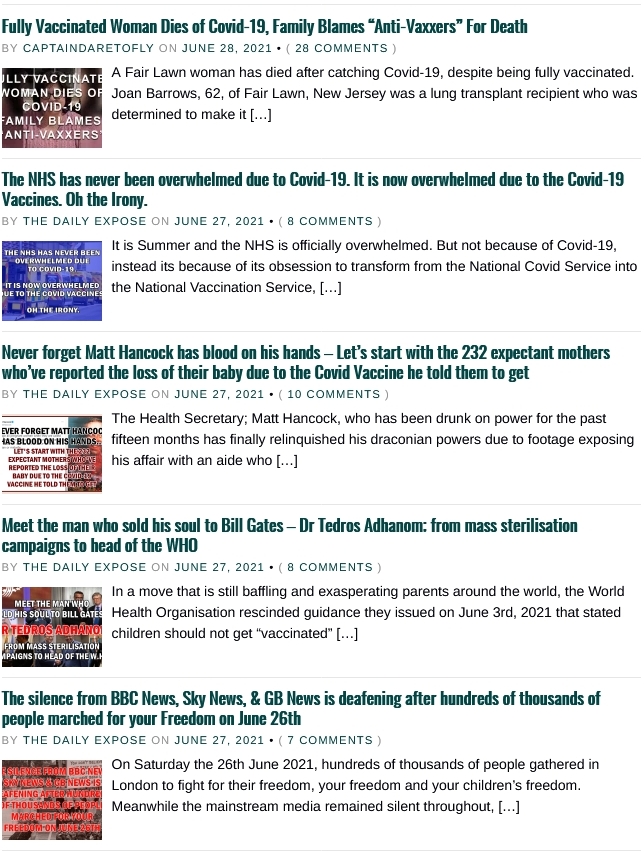 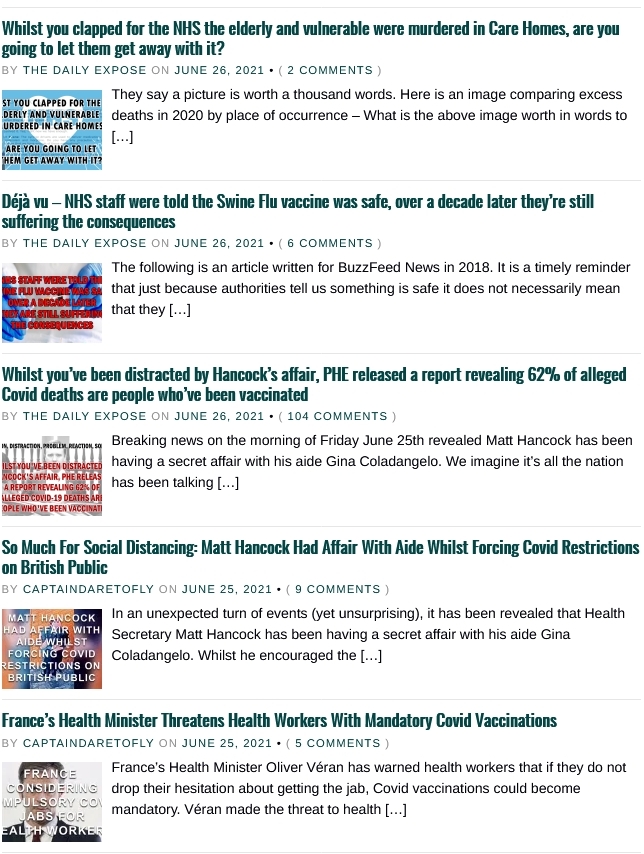 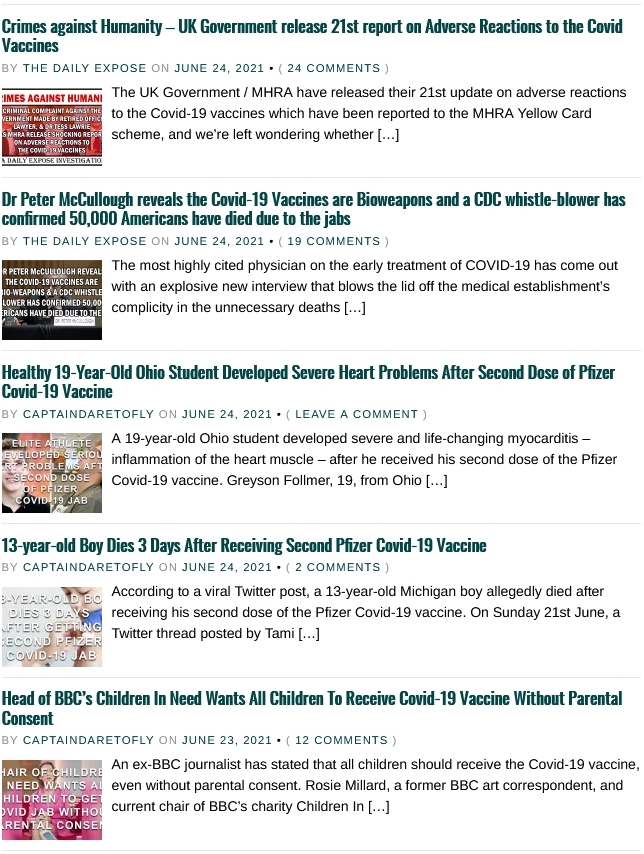 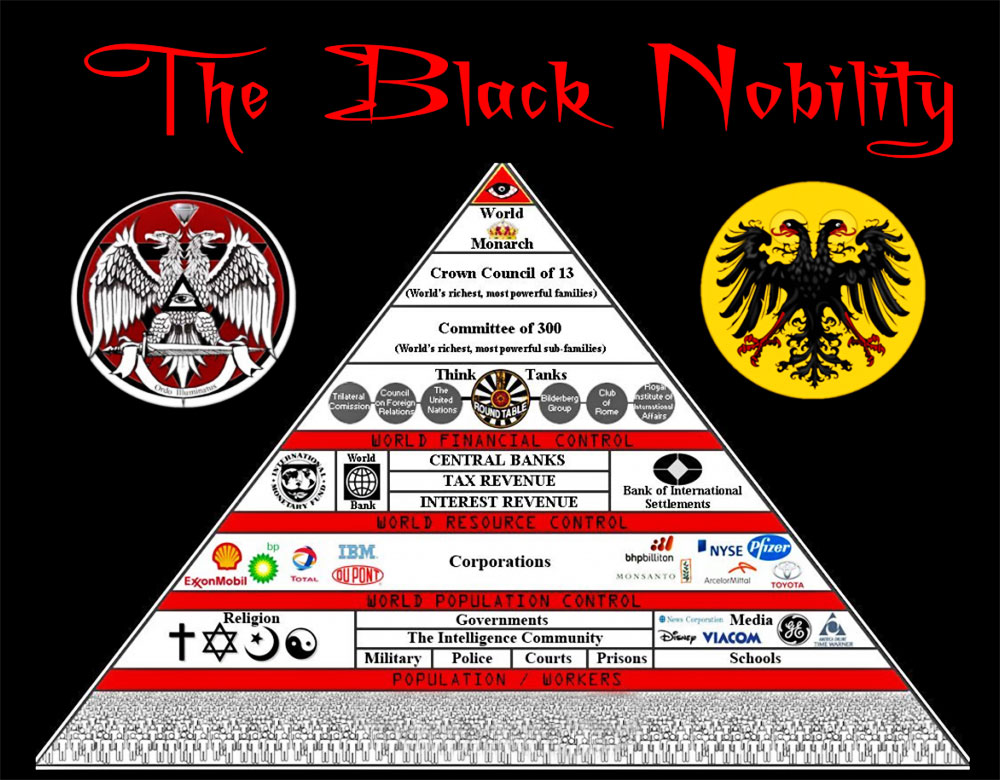 The "Black Nobility" are/were the oligarchic families of Venice and Genoa, Italy, who in the 12th century held the privileged trading rights (monopolies).
The first of three crusades, from 1063 to 1123, established the power of the Venetian Black Nobility and solidified the power of the wealthy ruling class.
The Black Nobility aristocracy achieved complete control over Venice in 1171, when the appointment of the Doge was transferred to what was known as the Great Council, which consisted of members of the commercial aristocracy (among them the infamous de'Medici family).
Venice has remained in their hands ever since, but the power and influence of the Venetian Black Nobility extends far beyond its borders, and today it is felt in every corner of the globe. (Don't forget, our modern banking system originated in Italy.)
In 1204 the oligarchic family parceled out feudal enclaves to their members, and from this epoch dates the great building-up of power and pressure until the government became a closed corporation (don't we know this from somewhere?) of the leading Black Nobility families.
More of this can be found in the works of Dr. John Coleman, Black Nobility Unmasked World-wide, 1985; Conspirators' Hierarchy: The Story of the Committee of 300, 1992.
Question: the Christopher Columbus story is a concoction. How about the Marco Polo stories? Anyone?
The Black Nobility earned its title through dirty tricks, so when the population revolted against the monopolies in government, as anywhere else (aren't we), the leaders of the uprising were quickly seized and brutally hanged.
The Black Nobility uses secret assassinations, murder, blackmail, the bankrupting of opposing citizens or companies, kidnapping, rape and so on… hence their name.
Who are these families today?
Well, the most important ones are:
Listed here https://bibliotecapleyades.net/sociopolitica/esp_sociopol_blacknobil02.htm
.
Rothschilds - Sabbatean Frankists are the fall guys for the global genocide at present, according to Benjamin. Rockefellers are part of the Rothschilds by marriage and other arrangements such as participation in the Pilgrims Society.
.
Hopeporn, I hope Benjamin is not such a purveyor, has avoided many from acting. I suspect Mr Trump has had the wool pulled over his eyes by some in the military. His "advisors" in the military need to be outed, if they be such. It's difficult to judge from this side of the pond.
.
I wish this was just a fantasy conspiracy story. Estimates say well over a billion dead within 2 years.
.
London protests, the people that turned out at the weekend, is that the best you can do?
Just kidding. It was a fantastic turnout. Thanks for letting the scum know whose country this is. Bless you all. UK Column 30th has some really good pics and footage.
https://www.ukcolumn.org/ukcolumn-news/uk-column-news-30th-june-2021

Jim's expose is not the nanoparticle graphene oxide relevant to the 5G - 6G systems.
https://www.orwell.city
The oxide can be dispersed in water and solvents, other liquids.
https://www.graphene-info.com/graphene-oxide

Jim Stone: HOAXSTERS are WORKING OVERTIME to promote the MYTH that LIQUID GRAPHENE is in the JABS to DISCREDIT the legitimate MAGNETISM DISCOVERIES and VIDS
Posted By: NaturalWisdom
Date: Wednesday, 30-Jun-2021 14:46:05
www.rumormill.news/175771

Jim Stone, Freelance Journalist
FACT: If the Pfizer vax was mostly graphene, it would be JET BLACK.
In fact, if it had even one half of one percent graphene, it would be JET BLACK. It's a clear yellowish liquid in the vials, I am not even going to the graphene topic, it is PURE BULLSH*T.
HERE IS LIQUID GRAPHENE. ENOUGH OF THE B.S. ABOUT IT BEING IN THE SHOTS, my god whoever started this hoax was really praying for stupidity.
The hoax story goes like this: Graphene is magnetic, and is what is causing the magnets to stick. That's a load of crap. Graphene is PARAMAGNETIC and does not exert enough of that effect to show up in a practical sense at all. Someone is laughing their butts off at the people that are passing the graphene shot hoax along because you can look right at the vials and see they are not black, and/or have no black sediment in them. Any photos of liquid graphene that might be transparent ALWAYS has the graphene settled out in the bottom of the vial, to be shaken when used.
Someone wants the legit magnet stick vids fully discredited, so they are launching hoaxes like graphene in the shots and then falsely claiming graphene is highly magnetic when it is exactly the opposite, and weakly the opposite! Someone is throwing a hail mary into the path of ignorance and hoping for someone to trip.
To add insult to injury, whoever fronted the "magnetic graphene" hoax probably relied on this report or similar which clearly states that though graphene CAN be made to become magnetic, it can only be caused to at extremely high pressures. You know, like what is in a vaccine vial? NOT. And high blood pressure won't cut it either!!! I do not care if the words "scientist" and "electron microscope" were used, or where it was published, the story is patent CRAP.
One point they make in the story: The shot was 99 percent graphene. Graphene is a solid. Even in powder form it is a solid. That will NOT pass through a needle. If it ever takes a "liquid form" it has to be suspended in a liquid, and any real scientist would have known not to count the liquid as graphene even if they called it "liquid graphene", which is not possible. To be "liquid" it has to be suspended, and the suspension medium is an ingredient that will prevent the shot from ever being 99 percent graphene. That is another way to know the story is PURE CRAP.
I have warned my readers constantly to not fall for hoaxes with regard to this vax, those who want the magnetism discoveries discredited are working overtime to front the most salient bullsh*t imaginable.
===
Subscribe