One for Americans, One for Brit Bobbies. House arrest to end. Rumors March 30-31. Flip Vax the Bird.

UKC, next post. Rumors 31st done.
Passing thought for the GoT series producers. How about a Game of Corporate Chairs for a series? Just as bloodthirsty, plenty of scandal.

You Are Being Prosecuted Under Foreign Bills of Attainder
Paul Stramer Lincoln County WatchMarch 29, 2021
By Anna Von Reitz
.
A "bill of attainder" is a legislated action predefining a class of persons (not people) to be guilty a priori, often without a trial or with a sham trial.
Americans are specifically exempted from being prosecuted under bills of attainder by Article IV of the Federal Constitutions, but you, unfortunately, are not being recognized as an American.
( Expand the full articleCollapse )
---0---
.
One for British Bobbies. They are seeing two Police Forces, the same as the public is experiencing.
The Global Service Corporations Want You Dead -- Christopher James
Christopher James from https://awarriorcalls.com returns to SGT Report to expose the service corporations which have disguised themselves as lawful governments.

Police, Friend or Foe?
Every constable is an independent legal entity; the public’s guarantee of impartiality. Officers of the crown operate independent of undue influence, interference and with a personal responsibility which requires a unique type of person and commitment.
https://www.durham.polfed.org/ksupload/userfiles/The%20Office%20of%20Constable%20with%20links%202018.pdf

My reading and eyes tell me:
On one side are the "Police Officers" that know they serve a corporation regime under Corporation (Statute, Admiralty, Fascist) Law that only applies to corporate entities, those that are "lost at sea," by birth and conscription,  those that are employed by or receive benefit from the corporation regime and those that signed away ALL their rights by registering to vote, i.e. giving away all their rights to a pre-selected politician that is very likely a Communist Purpose graduate or Talmudic Freemason. (Luciferian Satanic)Talmudic ritual includes masking, hand washing and isolation
The country is being stolen and these "Police Officers" (natural and Israeli trained thugs) are assisting the thieves.
On the other side are the Police Officers that believe they serve the Queen (as the Crown) and Country.
The Crown is a corporation.
A corporation sole, the Crown is the legal embodiment of executive, legislative, and judicial governance in the monarchy of each country. These monarchies are united by the personal union of their monarch, but they are independent states. The concept of the Crown developed first in England as a separation of the literal crown and property of the kingdom from the person and personal property of the monarch. It spread through English and later British colonisation and is now rooted in the legal lexicon of the United Kingdom, its Crown dependencies, and the other 15 independent realms. It is not to be confused with any physical crown, such as those of the British regalia.
Wiki https://en.wikipedia.org/wiki/The_Crown

The Queen abdicated the throne of England in 1953 when she surrendered it by breaking her contract in taking the Chair of the Estates. She can't wear two crowns. She broke her contract again in signing away sovereignty to the Jewish corporation called the EU Commission.treaty by treaty. However, sovereignty is indivisible and it can be argued that no crime was therefore committed until the final treaty that depended on the referendum for public support, that Cameron expected to win due to the 5eyes corporation control of the votes by (I believe) the Dominion server in Germany.
If the Queen as Chair of the Estates signed that treaty, she should be in the Tower with the Levy Council, and her other legal advisors. No point in observing successive treason by each regime since and including the traitor and paedophile Heath's regime as the Police are there to enforce corporation legislation and protect the corporation, not to protect the public especially from the corporation regime.

Choose a side. Let the public know whether you are for or against the Satanists and their theft of Britiain.
Common Law is superior to Statute Law in every country.
So Constables, where do you stand? Don't ask your union, all unions are controlled by the enemy.
In Germany the military are protecting the public from the police. In Britain, our military has been surrendered to the EU and NATO, an American corporations controlled land pirate and mass murdering outfit.
---0---
.
Police and Council brown shirts' enforced "voluntary" house arrest to end.
No more lockdowns – Britain will treat Covid like flu, says Chris Whitty
[They treated it as the flu as far as statistics fiddling goes. Cc]
Sarah Knapton
DT via Yahoo Thu, 1 April 2021
Lockdowns are unlikely to be needed again as Britain learns to treat coronavirus like flu, Prof Chris Whitty has said.
The chief medical officer said that up to 25,000 people die in a bad flu year without anyone noticing and that accepting some Covid deaths would be the price of keeping schools and business open and allowing people to live a "whole life".
[...]
https://uk.news.yahoo.com/no-more-lockdowns-britain-treat-152729910.html
This unwholesome piece of it should be before a Common Law Court for his part in the crimes against humanity. What outfit is he from, MI5, 6? Bank of England? Freemason 33deg? The only real question is whether he will get a corporation knighthood for his services against humanity. When he kicks the bucket, bury him next to Savile.
---0---
.
Rumors
AstraZeneca vax has been rebranded as Vaxzevria
Pfizer says massive "vaccination" roll-out is "Crime Against Humanity
What are these strange wiggly things in masks?
Imagine it's Biden!
Ebola Outbreak bolleaux
.
( expand Tuesday 30th MarchCollapse )
---0---
. 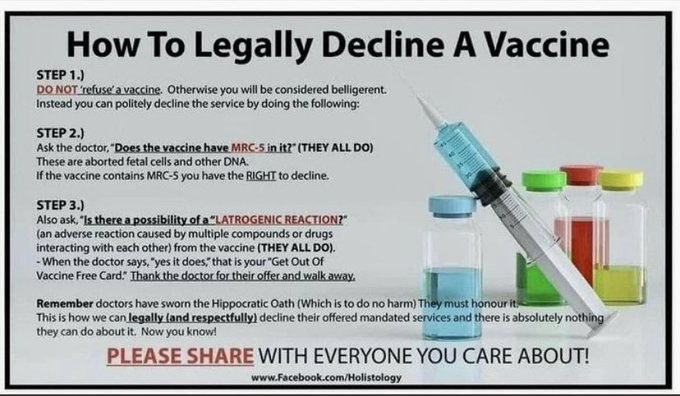 ---0---
More Rumors
Biden Regime Declares War On Russia
The Diaper Report
( Expand Wednesday 31st MarchCollapse )
---0---
.
Can't help thinking about those poor Israelies that were taught to think of non Jews as a lower life form, that were treated like lab rats. Many died from the CV injection. The rest will now spend their life with the 666 subcutaneous tatoo.
I expect the Black Pope has endorsed it.

I've a strange feeling something unexpected and really big is coming, and it isn't nuclear war. A white summer?
Subscribe