Fulford Feb 15. Here is the Evidence. Sick of This BS? Being Color Blind. Plandemic Irregularities

Put quite simply, the COVID 19 novel coronavirus is a mental construct (insane hypothesis, fantasy) being used for the political oppression of you to enable the zeroing of the global economy to enforce digital, the destruction of the political order in favour of the always disastrous Satanic Jewish philosophies, the destruction of society in favour of total control by appointed authorities and the destruction of small business in favour of supermarket corporations. Oh, and the imposition of fascistic corporation governance.
The same trick with CO2 and CAGW (insane hypothesis)  brought us CO2 tax and loss of rights. It's a safe bet there will be a COVID tax. And loss of more if not all rights.
In case you still can't see it, the plan is for cascading corporations headed by a global government corp down through global region supra gov corps, national city region gov corps to local council corps.
All the corps need an 'e' added. With prejudice.
Where does communism raise its hideous head? That is what the fake Judeans wish to impose via Commonunist Purpose on the populace at the bottom of the pyramid. Apart from being Satanic ritual, masks, distancing, isolation hand washing and other ridiculous edicts are conditioning you to obey the regime corporation without question. Like good little Chinese Bolshevik Communists. Why corporations? When everyone is in the sphere of influence of corps then you belong to the corps. They can experiment on you, conscript you, sacrifice you and your kids, take your kids for sick, evil reasons, euthanise you, and feed you to the pigs. You have as many rights as a lab rat. Free men and women are outside their influence. That freaks the freaks (13 bloodline families) out.
If that isn't enough, the planned global religion is Luciferianism aka Satanism. One option, accept or die.
The planned global law is Noahide. I'll let you research that to discover whether it is good for you.
---0---

I couldn't find this on the web so:
.
Possibly the most comprehensive dismissal of the CV19 pandemic

Jaymie and Dr Kaufman.
---0---
.
Here's another good one, very informative. Makes it safe to talk about coronavirus and COVID because the patents are illegal. Natural organisms can't be patented. If it is doctored (gain of function) then it is a bioweapon and is illegal. The patents are false, fraudulent.
Plandemic Exposed - David E. Martin
https://www.youtube.com/watch?v=IC3YZDp9V9o
and a different aspect:
Plandemic for Profit
https://www.bitchute.com/video/Nex1roYDQRGp/

The source for these mini docu vids, the original full Plandemic documentary is stabled at:
https://freedomplatform.tv/

Plandemic II: Indoctornation
https://bluecat.media/plandemic-ii-indoctornation-2/
(Good selection of vids in the side bar there.
---0---
.
Fulford full newsletter: "Gnostic Illuminati Demands Khazarian Mafia Surrender"
Posted By: MrFusion [Send E-Mail]
Date: Thursday, 18-Feb-2021 13:05:17
www.rumormill.news/166404
---0---
The UN is controlled by the Rothschilds and 12 other legacy families/tribes. The hydra head of the snake (or octopus).
Most regimes are UN company offshoots. The COVID confidence trick as laid out in the Rockefeller Foundation 2010 Lockstep and introduced by Event 210 in 2019 has been implemented through the UN and its offshoots like the BODJ (board of directors Jew) regime corporation.
I recall mentioning the fact that we could end up fighting America if we stayed in the criminal EU corporation (EUnification was a corporation merger. People probably smiled up their sleeve. If Fulford's info is fact, we came within a whisker.
I wonder how this sits with the Bodj regime corporation and top brass pro EU integration of military forces? Have they been taken care of? If not, Benjamin's info source may be telling porkies and wishful thinking, or disinfo. The intel services seem to have two faces, one looking corporationwards and one toward us. Remember, they got Muslims to fight Muslims by saying they were fighting Jews. False flags to occasion regime change in favour of corporation friendly traitors and to maintain a frightened populace is their trademark. The chaos in America has a trademark. In the MENA arena the false flags acquired the name "colour revolution."
If oldmaninthedesert happens to see this, I wonder if he has any info on old Jerusalem being in Yemen?
Cc
---0---
.
The CO2 confidence trick 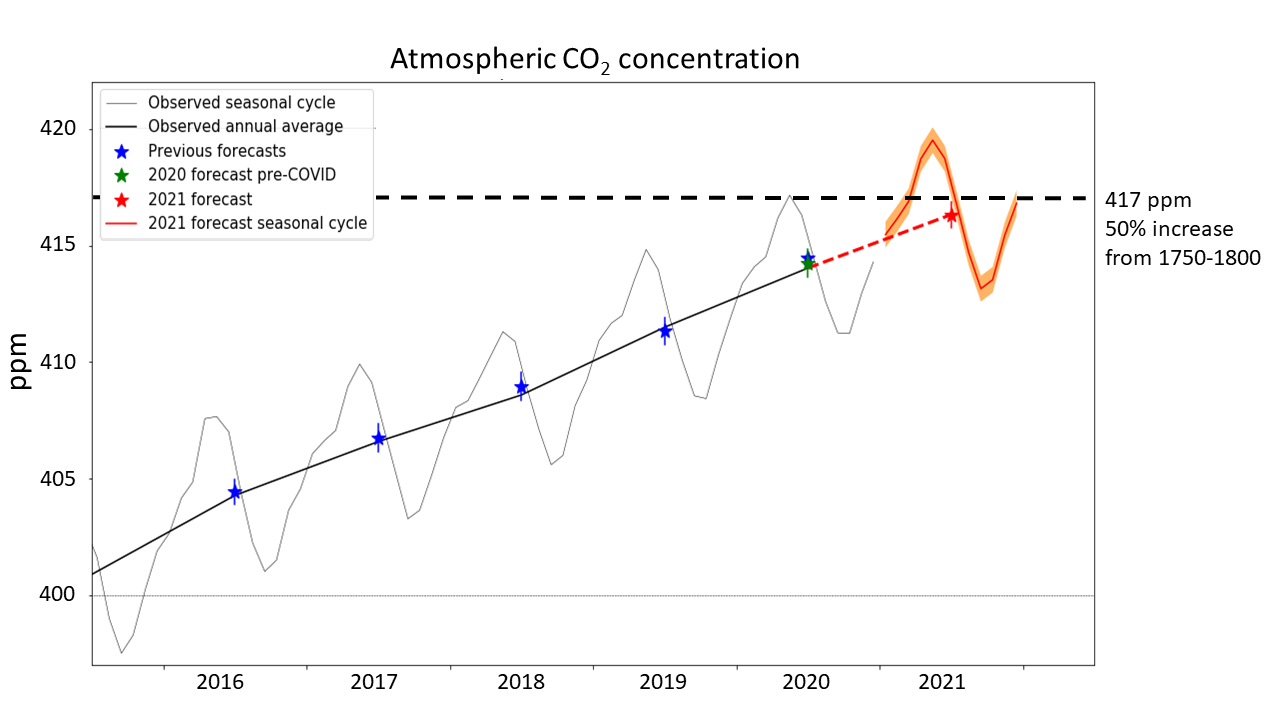 Image from Mauna Loa https://www.metoffice.gov.uk/research/climate/seasonal-to-decadal/long-range/forecasts/co2-forecast-for-2021
How can this be? Why has temperature continued to decline (longer winters, short hot summers are fthe fingerprint of a cooling climate) when heavily taxed CO2 emissions were the solution to climate warming touted by our alleged representative politicians?
Well, the continued increase in emissions is because China, India and other developing nations were given a free pass by the (13 tribe reps controlled) UN to emit as much CO2 as they wish. The European Jew controlled corporations were moved to China to benefit from the zero carbon tax scam. Scam? The UN admitted it was about wealth transfer rather than the environment.
Why is the climate cooling? The planet's distance from and attitude to the Sun, (tilt) and solar proton emissions that increase when sunspots are evident reduce the ozone layer and allow higher volumes of UV to reach the oceans that warm. Because the oceans cover over 70% of the planet,they control the climate according to their solar radiation controlled temperature.
CO2 occupies zero point zero 4 percent of the air. The man-made fraction, indistinguishable from other natural sources is incapable of influencing the direction of climate change because the maximum effect of the increasing CO2 volume is to lower the height of absorption to extinction of the IR that CO2 can absorb and re-emit at a lower energy frequency. CO2 cannot store or transport energy. At the tropopause (border between the tropo and stratosphere) CO2 sends energy upwards, a cooling factor. More CO2=more energy sent to space, in fact the gas is a part of the climate regulation system. Our alleged representative politicians and Saint Greta are unaware of this because vast sums are spent to persuade them that the sky is green and CO2 is a miracle molecule. And because they are not among the brightest candles in the chandelier.
---0---
Here is the evidence Election 2020
2,036,041 Ballots Touched By Anomalies
923 Fact Witnesses
50+ Courts Blocked An Evidentiary Hearing
List : https://hereistheevidence.com/

Here is the evidence COVID
Due to the irregular nature of the COVID-19 responses, this is a crowdsourcing tool for organizing the economic ramifications, scientific inconsistencies, and legal issues. Our desire is to see a rational and principled approach to COVID-19 where the rights of citizens and commerce are protected.

This is for aggregating publicly available items of evidence that would be admissible in courts, not general news stories.
188 entries in various categories.
List https://hereistheevidence.com/covid/
May be useful in Admiralty court cases against the Johnson terrorist regime. imo.