IS THE CORONAVIRUS COVID 19 EVEN REAL?

For years Eco-Enthusiasts, both activists and scientists, have been telling us that the ‘party’ will come to an end. The planet we are stuck on can’t take it for much longer, it is getting too crowded and unbearably warm. Most people didn’t take any real notice of the situation and for a reason. This planet, we tend to think, isn’t really ‘ours,’ we were thrown onto it and for a limited time. Once we grasp the true meaning of our temporality, we begin to acknowledge our terminality. ‘Being in the world’ as such is often the attempt to make our ‘life-time’ into a meaningful event.

Most of us who haven’t been overly concerned with the ecological activists and their plans to slow us down knew that as long as Big Money runs the world, nothing of a dramatic nature would really happen. In the eyes of Big Money, we tended to think, we, the people, are mere consumers. We understood ourselves as the means that make the rich richer.

Rather unexpectedly, life has undergone a dramatic change. In the present age of Corona, Big Money ‘let’ the world lock itself down. Economies have been sentenced to imminent death. Our significance as consumers somehow evaporated. The emerging alliance we have been detecting between the new leaders of the world economy (knowledge companies) and those who carry the flag of ‘progress’ ‘justice’ and ‘equality’ has evolved into an authoritarian dystopian condition in which robots and algorithms police our speech and elementary freedoms.

How is it that the Left, that had been devoted to opposition to the rich, has so changed its tune? In fact, nothing has happened suddenly. The Left and the Progressive universe have, for some time, been sustained financially by the rich. The Guardian is an illustrative case of the above. Once a left -leaning paper with a progressive orientation, the Guardian is now openly funded by Bill & Melinda Gates. It shamelessly operates as a mouthpiece for George Soros: it even allowed Soros to disseminate his apocalyptic pre-Brexit view at the time he himself gambled on Brits’ anti- Brexit vote. By now it is close to impossible to regard the Guardian as a news outlet – a propaganda outlet for the rich is a more suitable description. But the Guardian is far from alone. Our networks of progressive activists fall into the same trap. Not many of us were surprised to see Momentum, Jeremy Corbyn’s campaign support group within the Labour Party, rallying for the ‘Holocaust Survivor’ and ‘philanthropist’ George Soros. When Corbyn led the Labour Party, I learned to accept that ‘socialists’  putting themselves on the line of fire defending oligarchs, bankers and Wall Street brokers must be the new ‘Left’ reality.

We are now inured to the fact that in the name of ‘progress’ Google has demoted itself from a great search engine into a hasbara outlet. We are accustomed to Facebook and Twitter dictating their worldview in the name of community standards. The only question is what community they have in mind. Certainty not a tolerant and pluralist western one.

One may wonder what drives this new alliance that divides nearly every Western society? The left’s betrayal is hardly a surprise, yet, the crucial question is why, and out of the blue, did those who had been so successful in locating their filthy hands in our pockets go along with the current destruction of the economy? Surely, suicidal they aren’t.

It occurs to me that what we may be seeing is a controlled demolition all over again. This time it isn’t a building in NYC. It isn’t the destruction of a single industry or even a single class as we have seen before. This time, our understanding of Being as a productive and meaningful adventure is embattled. As things stand, our entire sense of livelihood is at risk.

Continues: https://www.zerohedge.com/markets/controlled-demolition-all-over-again
.
-sss-oo080oo-sss-
.
Piers Corbyn has been doing his best to alert people to the criminality and criminals behind the Agenda 21 scamdemic and the Agenda 21 climate change hoax.
He also offers advice on where to meet and what action to take.
Twitter (spit to clean my mouth) https://twitter.com/Piers_Corbyn
His website http://www.weatheraction.com
Printable PDF:
http://www.weatheraction.com/resource/data/wact1/docs/BreakLockdownNeverAgainV4May222020.pdf
. 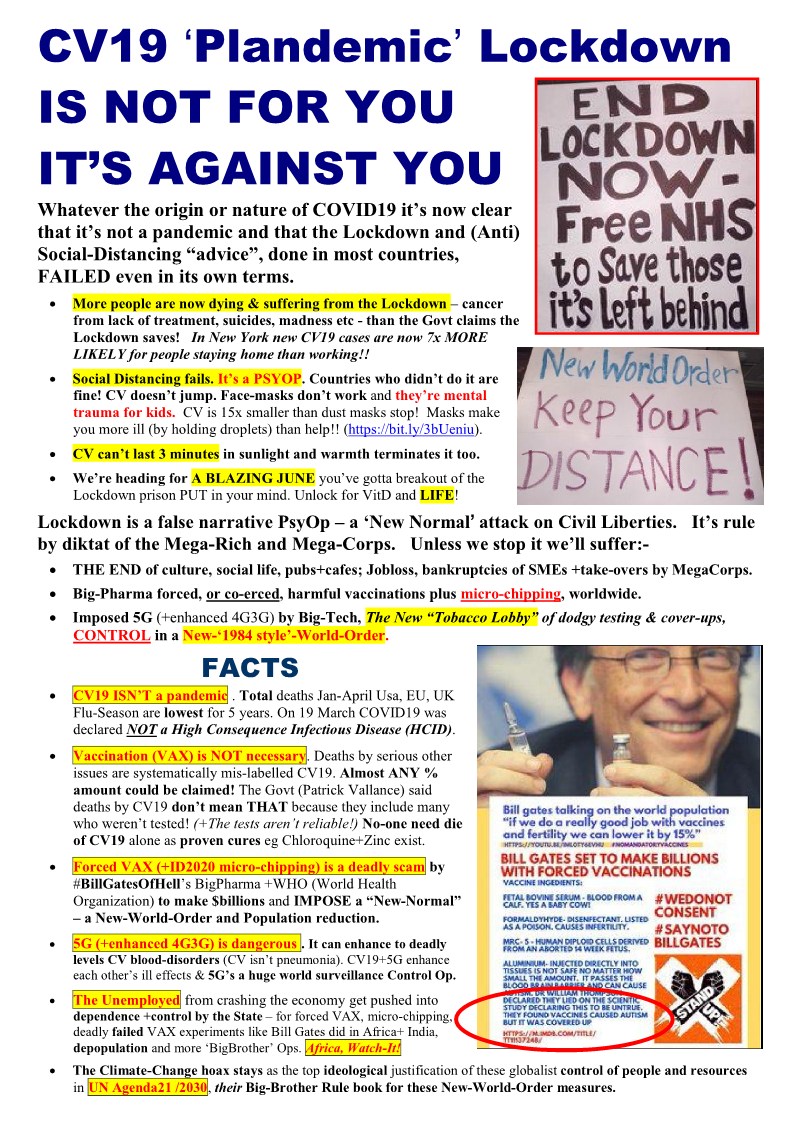 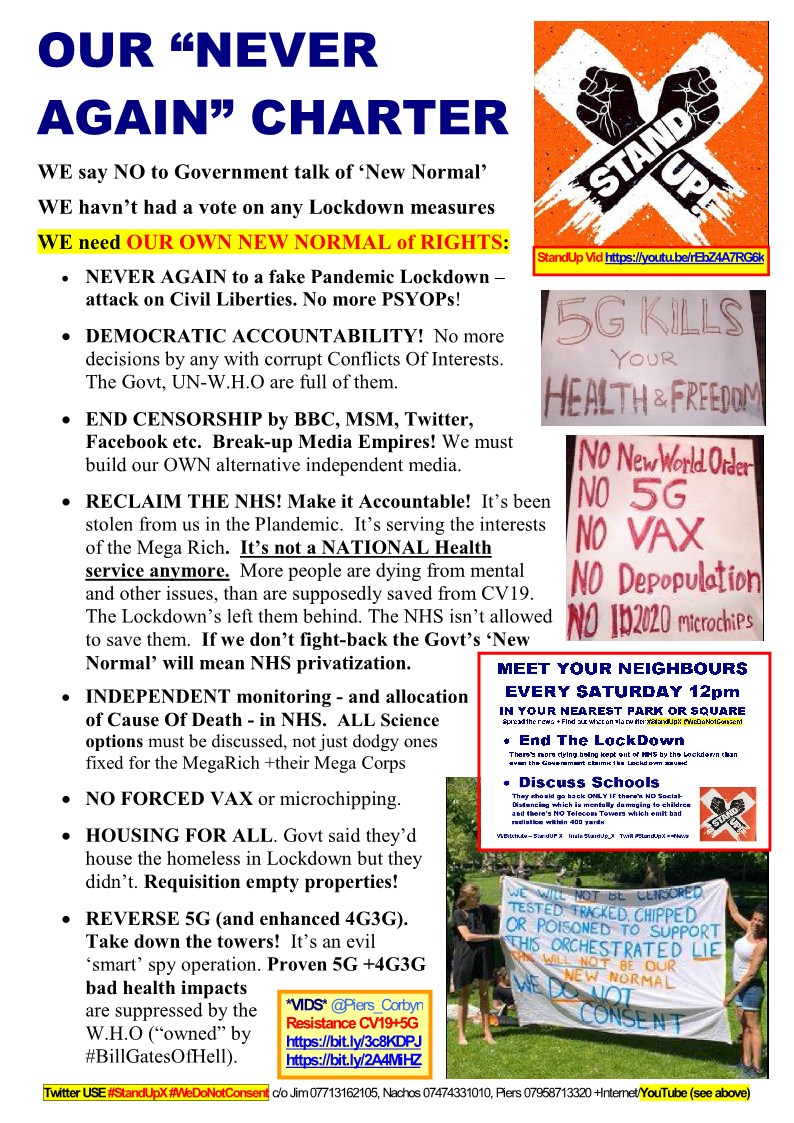 -sss-oo080oo-sss-
.
A conversation between sacks that possibly might not have taken place
Starring:
A sack of shit played by Bill Gates
Another sack of shit played by George Soros
Supporting cast sacks of shit played by diseased and queer presidents, prime ministers, Cabinets, FCO,
top brass, leaders of the Police, Civil Service, spooks, councils, health authorities, unions and news media editors.
And thousands of other useful idiots, squealers,and state employees.

Directed by the RIIA, produced by the CFR in collaboration with the Swiss (Vatican) CIA
A Pilgrims production sponsored by the taxpayer.
.
Soros: We need to get 5G implemented otherwise Smart Cities are dead in the water. We need to make the world sick so we can inject chemicals and nanobots to alter genes to make the slaves more like slaves and micro RFIDs so we control their access to currency and credit and make them sick every year.
Gates: Hmm. 9/11 worked out well. The CO2 scam worked out well. The vaccination scam is still playing out well. How about we use a fake bug to take the blame for 5G flu, use the TV fakery like we did for 9/11, get the MsM to tell huge lies about the harmfulness, contagiousness and death rate?
Soros: We need more.
Gates: Well, we control a lot of health services' middle management through Common Purpose and Masonry blood oaths, they can add believability to the utterances of the MPs we control.
Soros: But how can we make people sick? They tend to ask questions when they don't see lines of sick people and bodies piling up in the streets.
The SARSCOV2 we tested, aerosolised in that in vaping juice shop in Wisconsin was quite successful. But it wasn't contagious. It has to be aerosolised or injected. We'll do both. Add it to the EMR 'seasonal flu' vaccine. Install 5G everywhere as fast as possible. It makes people sick with flu like symptoms when the man-made EMR is stepped up, every time. And show them other countries and other disaster images like we always do, like the fake gassing of Ghouta in Syria, Libyan demos against NATO presented as anti Khaddafi demos. They're dolts, they'll swallow any shit as long as it comes out of a queer politician, health has been, copy typist journalist or pharms' sales rep doctor's mouth.
Soros: But what if #Clothcap exposes us?
Jewsuit Pope Franky: Hahaha, who cares?
.

Please do a petition to unseal Fauci's indictment.
If successful, perhaps a statue of his head on a pig's body as a memorial to arrogant greed driven psychopathy on the White House lawn, Gates, similarly bodied next to him and big litter of piglets to have the heads of the major enablers like Cameron, Blair, Bush, May and other Pilgrim mafia members. Then we could have CV19 5G pig flu street parties, like we use to have for German measles.