More exciting than waiting for Jesus to let us know which body he's in...

Is HMQEII the real deal? 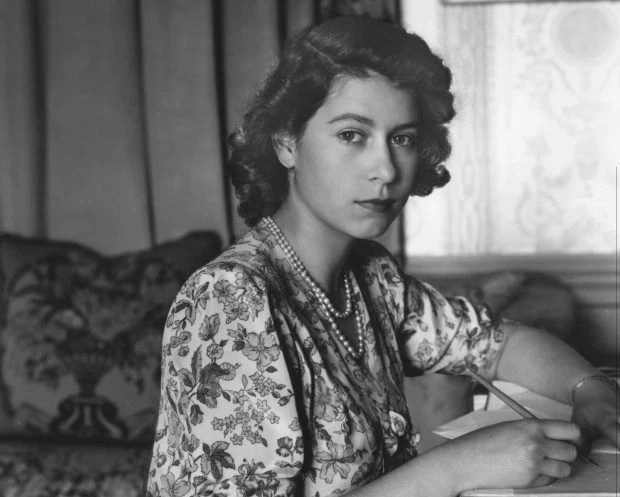 Above 2 collages source: Truther News and on the right, Princess Elizabeth, writing at her desk
at Windsor Castle, on May 30, 1944, aged 18. (Credit: Getty - Contributor)  from The Sun 1116 in Moon orbits, 186 in birthdays or 93 in Sun orbits, and still photogenic.
.
The lady definitely has or had a stand-in. But looking at the ears (and allowing for subsidence), I think we got either the real ear for this occasion or the stand-in has been with us since 1944. But then I'm no expert and not that difficult to deceive.

With regard to the occassion, the opening of Parliament, I'm surprised the good lady allowed the theatre of the absurd to resume. I'd have consigned all the actors to a Tower substitute, HMP Bronzefield (as most of them appear to be either female or sissified)  to await execution.

Assuming all the thoughts of the good people that voted to get out defeat the satanists, jesuits and witches' spells, as the bolsheviks unavoidably descend into their true nature and the european plunderfest becomes a putsch police state akin to the old jew run USSR and collectivism becomes the social disaster it always and inevitably becomes, we'll be on the outside saying thank the gods we got out.

The pageantry:
Queen's Speech 2019
Youtube 14 Oct 2019
The Sun
QUEEN Elizabeth will deliver her 65th Queen’s Speech to parliament today, October 14.
The speech is used to set out what the government intends to do during the next session of parliament and what the plans for the future are.
SCHEDULE:
NEXT - Boris Johnson departs 10 Downing Street and travels the short distance to the House of Commons
1030 - MPs start gathering in the House of Commons and Lords start gathering in the House of Lords
1100 - Royal Procession - Queen Elizabeth leaves Buckingham Palace in a carriage procession to the Houses of Parliament
1115 APPROX - MPs are called from the Chamber to listen to the Queens' speech
1130 APPROX The Queen reads out speech from the throne in the House of Lords.
1430 Johnson and Corbyn return to the House of Commons Chamber to debate the speech
Source: https://www.youtube.com/watch?v=SxlVM6oTAFE