Rubber mud slingers get the bounce back. And hopefully a strong kick in their bottom line.

Collusion, right under your nose...

In December, a Democratic operative who hatched a Russian "false flag" scheme against Republican Roy Moore in last year's Alabama special election promoted his own propaganda on the dubious "Hamilton 68" website - which purports to track Russian "bot" activity, yet refuses to disclose how they do it.

In January, an online disinformation campaign conducted by a former Obama administration official leading up to the 2018 midterm elections was bankrolled by left-wing tech billionaire Reid Hoffman, according to the Daily Caller's Peter Hasson. Hoffman, who co-founded LinkedIn, admitted in December to funding American Engagement Technologies (AET) - which is currently embroiled in a "false flag" scandal stemming from the 2017 Alabama special election. Now, AET and its founder Mickey Dickerson have come under fire for meddling in the 2018 midterm elections.

And now, as the Democratic establishment faces an onslaught of potential presidential candidates that are not toeing-the-line of radicalism, The Intercept's Glenn Greenwald exposes  the pure propaganda that the liberal media will resort to, in order to please their Democratic, deep state overlords and keep to "The Plan."

But the whole story was a sham: the only “experts” cited by NBC in support of its key claim was the firm, New Knowledge, that just got caught by the New York Times fabricating Russian troll accounts on behalf of the Democratic Party in the Alabama Senate race to manufacture false accusations that the Kremlin was interfering in that election.

To justify its claim that Tulsi Gabbard is the Kremlin’s candidate, NBC stated:

What NBC – amazingly – concealed is a fact that reveals its article to be a journalistic fraud: that same firm, New Knowledge, was caught just six weeks ago engaging in a massive scam to create fictitious Russian troll accounts on Facebook and Twitter in order to claim that the Kremlin was working to defeat Democratic Senate nominee Doug Jones in Alabama. The New York Times, when exposing the scam, quoted a New Knowledge report that boasted of its fabrications: “We orchestrated an elaborate ‘false flag’ operation that planted the idea that the [Roy] Moore campaign was amplified on social media by a Russian botnet.'”

At the same time that New Research’s CEO, Jonathan Morgan, was fabricating Russian troll accounts and using them to create a fraudulent appearance that Putin was trying to defeat the Democratic Senate candidate, he was exploiting his social media “expertise” to claim that Russians were interfering in the Alabama Senate election. In other words, Morgan used his own fake Russian accounts to lie to the public and deceive the national media into believing that Kremlin-linked accounts were trying to defeat the Democratic Senate candidate when, in fact, the accounts he was citing were ones he himself had fabricated and controlled.

Even worse, Morgan’s firm is behind one of the recent Senate reports on Russian social media election interference as well as the creation of “Hamilton 68,” the pseudo-data-driven dashboard constantly used by U.S. media outlets to claim that its enemies are supported by the Kremlin (that tool has so been abused that even some of its designers urged the media to stop exaggerating its meaning). During the Alabama race, Morgan – in a tweet he deleted once his fraud was exposed – cited the #Hamilton68 data that he himself manipulated with his fake Russian accounts to claim that Russia was interfering in the Alabama Senate race:
Continues: https://www.zerohedge.com/news/2019-02-03/nbc-news-exposed-reporting-pure-propaganda-gabbards-russia-links-disinfo-democrat

Tulsi Gabbard lashed out at "neocon" and "neolib warmongers" after NBC News was exposed trying to smear her as a Kremlin stooge. The network was called out over the weekend for relying on a Democrat-run firm that created fake Russian twitter bots to stage a "false flag" campaign against Republic Roy Moore in the 2017 Alabama special election - New Knowledge. 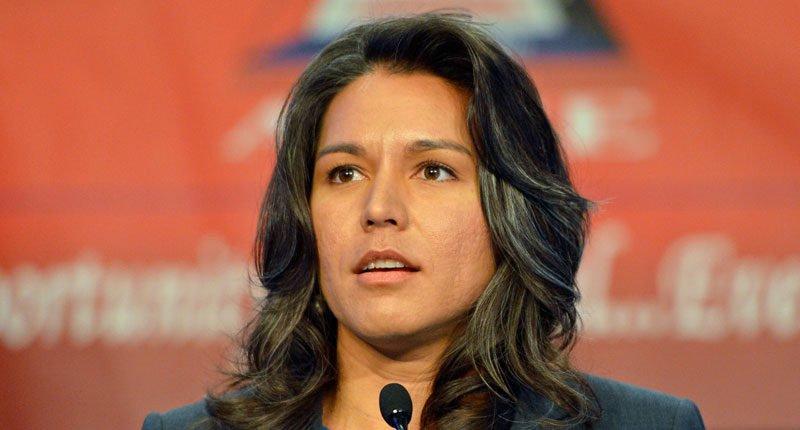 To justify its claim that Tulsi Gabbard is the Kremlin’s candidate, NBC writes:

Only to be called out hard by journalist Glenn Greenwald:

This NBC News report is a total disgrace from top to bottom. It's a joke using the most minimal journalistic standards. But that's because NBC is in partnership with the Democratic Party (and intel community) to smear any Dem adversary, on the left or right, as a Kremlin tool: pic.twitter.com/1jUhJQuhJu— Glenn Greenwald (@ggreenwald) February 3, 2019

After Greenwald fingered NBC for relying on New Knowledge - run by Jonathan Morgan (who also developed the technology behind "Hamilton 68" Russian bot-tracking propaganda website that refuses to disclose its methods) - Gabbard chimed in, tweeting:

"@ggreenwald exposes that @NBC used journalistic fraud to discredit our campaign. But more important is their motive: "to smear any adversary of the establishment wing of the Democratic Party – whether on the left or the right – as a stooge or asset of the Kremlin.""

"As commander-in-chief, I will work to end the new cold war, nuclear arms race and slide into nuclear war. That is why the neocon/neolib warmongers will do anything to stop me.

As commander-in-chief, I will work to end the new cold war, nuclear arms race and slide into nuclear war. That is why the neocon/neolib warmongers will do anything to stop me. https://t.co/MPybv8AZ5p

Disturbingly, the Senate Intelligence Committee has relied on a report by New Knowledge on Russian social media election interference, while the firm has created a "Hamilton 68" offshoot, "Disinfo2018" referenced in the NBC article, which claims that three of the top URLs propagated throughout social media by Kremlin bots were about Gabbard.

Three of the top 15 URL's shared over the past 24 hours by 800 Russian-linked disinformation accounts tracked by Disinfo2018 are about Tulsi Gabbard, the pro-Putin, pro-Assad congresswoman who just announced she's running for POTUS in 2020. (One URL is an article; 2 are tweets). pic.twitter.com/SG43IGt9ZV

In short; NBC relied on a known propagandist who created a Russian bot "false flag" to meddle in an election, who claims to track pro-Kremlin Twitter activity, in order to smear Tulsi Gabbard as a Putin puppet.

And your article is one of the hottest piles of garbage masquerading as "journalism" that I've ever seen, so congratulations on that. You're a pathetic joke

Except they're not "experts" NBC--they're admitted forgers. You're a rabble NBC. A complete rabble. Go back to school: https://t.co/e9KJU2oisv … pic.twitter.com/1XnfMmjqgh

It's uncanny what lengths the establishment will go to in order to eliminate threats. For example, take a look at this Vanity Fair hit piece from Jan 30, which uses perhaps the most unflattering photo Gabbard has ever taken and starts off (emphasis not ours):

The presidential campaign of Rep. Tulsi Gabbard, the renegade Democrat known as much for her chummy relationship with Bashar al-Assad as for supporting Bernie Sanders, is beginning to resemble the candidate herself: confusing, disorganized, and, according to Politico, falling apart. -Vanity Fair

If you squint hard, you can almost tell they don't like her. Very subtle pic.twitter.com/duwKhrrUd1

One question remains; will Gabbard become a Democrat puppet like Bernie Sanders if the DNC colludes with their chosen candidate to cheat against her?