All along, her support for Brexit was more rhetorical than real 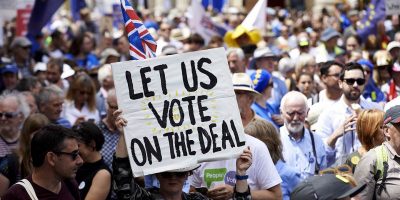 On June 23, 2016, majority UK voters supported leaving the EU – what Western Europe countries never should have agreed to in the first place – subordinating their sovereignty to America.

The European Union was a CIA creation. Harry Truman’s secretary of state Dean Acheson originated the idea, a way for the US to colonize Western Europe post-WW II.

It was all about Washington wanting control over EU member countries as vassal states, largely doing America’s bidding – even when harming their own interests.

France’s Charles de Gaulle was the only Western European leader against surrendering his country’s sovereignty to the US.

Truman threatened to cut off Marshall Plan aid if France refused to bend to Washington’s will.

Nearly two-and-a-half years after Brits voted for British exit from the European Union (Brexit), Theresa May failed to deliver what she promised.

“We do not seek to hold on to bits of membership as we leave. The United Kingdom is leaving the European Union. My job is to get the right deal for Britain as we do.”

All along, her support for Brexit was more rhetorical than real. A May 2016 leaked audio recording  caught her as home secretary saying:

“I think the economic arguments are clear. I think being part of a 500-million trading bloc is significant for us.”

“I think, as I was saying to you a little earlier, that one of the issues is that a lot of people will invest here in the UK because it is the UK in Europe.”

“If we were not in Europe, I think there would be firms and companies who would be looking to say, do they need to develop a mainland Europe presence rather than a UK presence? So I think there are definite benefits for us in economic terms.”

“There are definitely things we can do as members of the European Union that I think keep us more safe.”

Her view on Brexit as home secretary contrasts markedly with her remarks as prime minister, indicating opposition to leaving the EU, not supporting it.

It’s up to Britain’s parliament to decide. Many MPs oppose the deal she cooked up with Brussels. Labor leader Jeremy Corbyn called it “half-baked (following over) two years of bungled negotiations,” adding:

It gives MPs a false choice “between a half-baked deal or no deal…a failure in its own terms. It doesn’t deliver a Brexit to the whole country.”

“It breaches the prime minister’s own red lines. It doesn’t deliver a strong economic deal that supports jobs and industry. And we know they haven’t prepared seriously for no deal.”

“Even (Tories) say the the prime minister is offering a choice between the worst of all worlds and a catastrophic series of consequences.”

May and her cabinet members agreed on a deal critics call shameful capitulation to Brussels, likely what the prime minister had in mind all along – supporting Brexit rhetorically while undermining what it’s supposed to be.

Economic powerhouse Germany is the dominant EU member state. Its Foreign Minister Heiko Mass welcomed what May agreed to, saying:

“I am very happy that the participants of the EU-UK talks have reached preliminary agreements in their Brexit talks,” adding:

“After months of uncertainty, we have finally received a clear signal from the United Kingdom about how the orderly (British) withdrawal can proceed” – rhetorically leaving the union while remaining in fact by acceding to key Brussels’ demands.

The deal involves Britain remaining more in than withdrawn from the EU before end of March 2019 – betraying the majority will of UK voters.

Leaked information about the deal shows Britain will remain in the EU customs union, Brussels “retain(ing) all the controls.” No duties are levied on trade between member countries. A common tariff is imposed on goods entering them.

Brussels is in charge of negotiating trade deals with other countries, not individual member states.

“The EU referendum offered a simple choice – to either stay in or leave the EU. The result was decisive with the UK public voting to leave, and that is what we as their elected representatives, must deliver.”

“The agreement put forward however, does not do that as it leaves the UK in a half-way house with no time limit on when we will finally become a sovereign nation.”

“We are a proud nation and it is a say day when we are reduced to obeying rules made by other countries who have shown that they do not have our best interests at heart.”

“We can and must do better than this. The people of the UK deserve better.”

“I cannot in good conscience support the terms proposed for our deal with the EU.”

May’s Secretary of State for Work and Pensions Esther McVey also resigned over opposition to the Brexit deal, saying she had no other choice, telling the PM her agreement with Brussels doesn’t honor the June 2016 referendum result – “fail(ing) to secure the right outcome for the future of our country.”

It’s unclear if May has majority parliament support to approve her deal. Labor MPs and at least some Tories and UKIP parliamentarians oppose it.

Clearly, she failed to deliver what majority Brits voted for – agreeing to subordinate UK interests to Brussels, surrendering British sovereignty to a higher power.

MPs have final say. It won’t be easy getting majority support. Strong opposition may reject the deal – opposed to Brussels retaining control over key UK policymaking.

Note to readers:
Forward this article to your email lists. Crosspost on your blog site, internet forums. etc.

Award-winning author Stephen Lendman lives in Chicago. He can be reached at lendmanstephen@sbcglobal.net. He is a Research Associate of the Centre for Research on Globalization (CRG)

His new book as editor and contributor is titled “Flashpoint in Ukraine: US Drive for Hegemony Risks WW III.”

Visit his blog site at sjlendman.blogspot.com.

Become a Member of Global Research