There is no Valid Mechanism for CO2 Creating Global Warming

Proof: Laboratory measurements show that carbon dioxide absorbs to extinction at its main peak in 10 meters under atmospheric conditions.* This means there is no radiation left at those frequencies after 10 meters. If then humans double their 3% input of CO2 into the atmosphere, the distance of absorption reduces to 9.7m.
A reduction in distance is not an increase in temperature.
Convectional currents stir the heat around removing any relevance for distance.
Scientists who promote the global warming hype try to work around this fact by claiming something different happens higher in the atmosphere, which they claim
involves unsaturation. The difference due to height is that the absorption peaks get
smaller and sharper, so they separate from each other. Near the earth's surface, the absorption peaks for water vapor partially overlap the absorption peaks for CO2.
Supposedly, in some obfuscated way, separating the peaks creates global warming. There is no real logic to that claim. It is nothing but an attempt to salvage global warming propaganda through obfuscation of complexities.
What it means is that climatologists admit there is no mechanism at lower levels of the atmosphere, and their rationalization for higher up is phony.
It's important to realize that radiation from the sun does not greatly heat the atmosphere, because the sun must give off high frequency radiation in the area of visible light, which goes through the atmosphere. Something as hot as the sun cannot give off low frequency radiation, called infrared. This means that the sun's radiation heats the surface of the earth, and then the heat moves from the earth's surface into the atmosphere through conduction, convection, evaporation and infrared radiation. The infrared radiation can be absorbed by so-called greenhouse gasses. 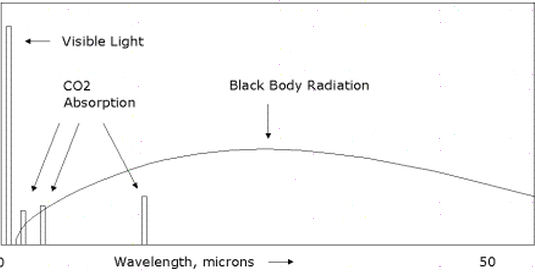 Carbon dioxide absorbs infrared radiation (IR) in three narrow bands of frequencies, which are 2.7, 4.3 and 15 micrometers (µM). This means that most of the heat producing radiation escapes it. About 8% of the available black body radiation is picked up by these "fingerprint" frequencies of CO2.

Heinz Hug* showed that carbon dioxide in the air absorbs to extinction at its 15µM peak in about ten meters. This means that CO2 does whatever it's going to do in that amount of space. Twice as much CO2 would do the same thing in about 5m. There's no significant difference between 5m and 10m for global warming, because convectional currents mix the air in such short distances.
But humans could not double the CO2, because they only put 3% of the CO2 in the air. If they put twice as much in, it would do whatever it does in 9.7m instead of 10m. If humans stopped putting any CO2 in the air, it would do whatever it does in 10.3m instead of 10m. In other words, nothing humans do with CO2 could be of the slightest relevance to global warming, even if oceans were not regulating it. (The weaker peaks and shoulders of the peaks absorb in longer distances. While strongest absorption occurs in 10m, weaker absorption for CO2 occurs in about 300 meters. But a 3% increase in CO2 is still only a 3% reduction in the 300m distance for the weak absorption areas.)

The Attempted Fix
This is nothing new. Climate scientists know that more CO2 does not result in more heat under usual conditions. So the mythologists among them try to salvage the global warming propaganda by pretending that something esoteric occurs higher in the atmosphere. The difference is that the absorption peaks for CO2 separate from the peaks for water vapor. Then supposedly, radiation which misses CO2 does not get picked up by water vapor and travels into outer space; and more CO2 causes less radiation to get missed on the shoulders of the peaks.
Everything about that rationalization stretches reality to a point of misrepresentation. The increase in CO2 levels could only be relevant for the last cycle of absorption near the outer edges of the atmosphere, where there is not enough influence of the lower atmosphere to be significant. But the rationalizers claim it is significant in the mid levels of atmosphere. Not so. A 3% increase in CO2 would only shorten the distance of radiation travel by 3% before total absorption occurs.

In other words, at mid levels of the at mosphere, the center of the peaks would absorb at about 30m instead of 10m, while the shoulders would absorb at about 1,000m instead of 300m. Reducing those distance by 3% is not relevant. But just like relativity, if it takes more than a mouthful of arguing to prove them wrong, frauds decree the obfuscation to be fact.
As shown on the page titled "Crunching the Numbers," the quantities involved are so miniscule as to be totally incapable of causing global warming.
There's another major reason why the fix is unreal. Supposedly, it is the outer shoulders on the CO2 peaks which are responsible for global warming. Not only is a small percent of the CO2 influenced by the shoulder radiation, but the distance increases for absorption. There is more nitrogen and oxygen per CO2 molecule in this area. Dilution reduces the temperature increase per unit of energy. If there is 5% as much CO2 on the shoulders, it is spread over 20 times as much space in the atmosphere. This means the temperature effect on the shoulders should be multiplied times 5% twice—once for the decrease in amount of CO2 and once for the dilution of the energy in the atmosphere. So much dilution of so few molecules could
not be responsible for a significant amount of temperature increase.
The miniscule area of concern on the shoulders of the absorption peak for CO2 is shown on one of Heinz Hug's graphs, linked below.

The Ill-Informed Assumptions
The assumption of some persons is that shorter distances mean the heat stays in the atmosphere longer before escaping into space. Supposedly, the radiation will be re-emitted and re-absorbed more often, when distances are shorter.
But they err in two ways. One is in not taking into account the convection which removes the relevance of short distances. The other is in assuming the direction is toward space.
When radiation is re-emitted in the atmosphere, it moves in all directions. The energy does not move closer to space, because it is not directional. The only way heat can move toward the outer atmosphere is through convectional currents.
Here's how the dynamic works. The IR is emitted from the surface of the earth as black body radiation, which has a wide bandwidth. Then CO2 absorbs a fingerprint set of frequencies, which is 8% of the available black body radiation. As it is absorbed, it is instantly converted into heat (in less than a pico second). The heat is distributed over all molecules in the atmosphere, which means 78% nitrogen and 21% oxygen. After some time, an equivalent amount of black body radiation is emitted from everything in the atmosphere, and 8% of it is absorbed by CO2 as fingerprint radiation.
Proponents do not have clear explanations for their assumptions. They use computer models and juggle the numbers until they get the results they want.

Adendum:
The fingerprint type of IR absorption is due to stretching and bending of internal bonds. Nitrogen does not do that. But all matter absorbs and emits IR in proportion to its temperature. This is called "black body" radiation. Physicists say all matter has the same characteristics in absorbing and emitting black body radiation, except that the quantitative proportions vary, mostly due to reflection. For nonreflective substances, such as wood and concrete, the percent IR absorbed or emitted (called emissivity or absorptivity) is around 90% of a perfect black body. Metals are good reflectors of IR, so they have an emissivity of around 50%. This means they emit or absorb about 50% of the infrared radiation which contacts them. Kirchhoff's law says emissivity equals absorptivity, which means everything absorbs and emits black body radiation in the same way.
There is a curve for black body radiation, and it applies to all matter. The curve slides toward higher frequencies for higher temperatures. At earth temperatures (around 300 degrees Kelvin) the black body curve (or Planks curve) peaks at a wavelength of about 10um. The sides of the curve taper off at
about 1um and 30um.
Visible light is 0.4 to 0.8um, which is just above the curve for cold black body radiation, but hot objects will radiate into the visible range, which is of course how an incandescent light bulb works. Carbon dioxide has fingerprint peaks at 2.7, 4.3 and 15um, which are all within the black body radiation curve.
In some quantity, everything in the air including nitrogen and oxygen absorbs and emits black body radiation at frequencies which overlap the frequencies absorbed by CO2. In fact, the only reason why there is IR in the air is because the surface of the earth emits black body radiation in proportion to its temperature. The air then does the same thing at some level.
The question then is, in what quantity is the atmosphere absorbing and emitting black body radiation. The emissivity of nitrogen and oxygen gasses should be close to 100%, since they do not reflect IR significantly. But the larger question is how does the quantity of black body absorption compare to the fingerprint absorption of CO2. Actual measurements and numbers do not seem to exist. So promoters use computer models to divide up the heat of the atmosphere between pollutants such as CO2 and everything else.
They then pull such numbers out of the hat which say increases in CO2 levels will create a global temperature increase of about 6 deg. This is about 20% of the 33 deg. which the atmosphere is said to contribute to the temperature of the globe.
There are about 30 times as many water vapor molecules in the air as CO2 molecules, and water vapor has a more effective fingerprint spectrum. It is also much more variable. This means water vapor will swamp whatever CO2 does. It is obviously not being honest to say CO2 does twenty percent of the heating, when there is a hundred times as much water vapor doing the same thing. 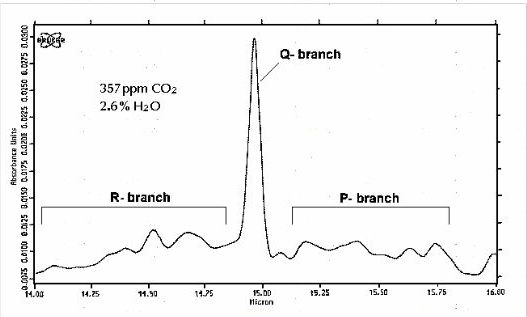 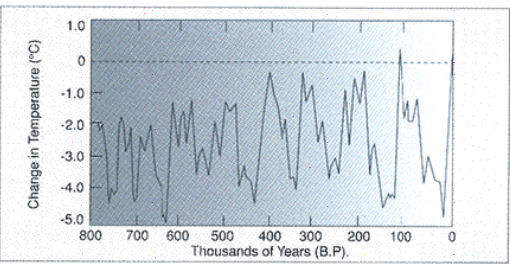 Ocean Temperatures over 800,000 Years Each cycle is an ice age. Now is above the dotted line on the right side. The oceans have been heating continuously since the last ice age. The smaller blips are caused by solar energy, and the larger cycles are caused by heat from within the earth, perhaps related to electromagnetic energy. (See Electric Universe by Talbott and Thornhill)

Related:
Global Warming Home Page
Global warming is not published the way science is. It's knowledge out of fakery.
http://nov79.com/gbwm/gbwm.html

I wonder how many Brit Met and UEA self-titled climate 'specialists' are freemason and or zionist?
.
Subscribe