Brexit: Expert tells it as it is

Britain being owned by the zio bank clerks that run - ruin the EU regime is beneficial for the 1%, politicians, the currency fraudsters in the BoE, for globalist corporations that are destroying the planet, for the OWG nutters and for the zionist gang that controls the EU dictators and assorted other concerns that work on upward wealth transfer that is legalised theft like inflation and the currency fraud.

How to write an economics polemic under such circumstances? How to argue about trade and geo-politics when an MP lies dead, her children bewildered, her husband in unspeakable pain?

I’ve written a weekly economics column for more than 20 years now, more than a decade in this newspaper. This one – so soon after Jo Cox’s death, yet just days before the referendum on Britain’s European Union membership – is easily the toughest.

My head is full of reasons I’ll vote Leave, reasons I still believe stand up to scrutiny. As this build up draws to a close, I also have plenty of telling anecdotes “from the campaign trail”.

What I can’t shake off, though, is the sense that, despite the looming vote, the public is utterly sick of this referendum: sick of “Project Fear”, sick of finger-wagging “experts”, sick of the battle between infantile virtue-signaling and feigned offence-taking among our political and media classes.

I’m voting Brexit because, economically speaking, the EU isn’t where it’s at

Yes, the stakes are extremely high. The whole country is like one big general election constituency during a referendum, so every vote counts. The reputations of many ambitious people are at stake on Thursday, to say nothing of the future path of the world’s fifth biggest economy and the broader “European project”.

Despite that, the conduct of our national debate, while robust and often testy, was until last week still just about acceptable. Then, a Yorkshire MP was slain. Ever since, as the public’s appetite for rhetorical knock-about has vaporised, that very knock-about has plumbed new depths of cynicism as the two sides have traded accusations of either “contributing to” or “exploiting for political purposes” this horrific and brutal murder.

I can only write it as I see it, despite the inevitability some will claim “disappointment” and even “disgust” I continue to advocate Leave, given that many already have. Because while the death of Jo Cox is a tragedy, the passing of a talented, public-spirited woman in barbaric circumstances doesn’t alter the fundamental arguments underlying this vote – even if it dominates the tone of campaigning over these final few days and impacts the nature of our politics (positively, I hope) in years to come.

So, I’m voting Brexit because, economically speaking, the EU isn’t where it’s at. In 1980, the bloc accounted for over 30pc of global GDP. Now, despite many more member states, it’s little more than 15pc. The UK currently sends 42pc of its exports to the EU, sharply down from 55pc just five years ago.“The continent”, today slow-growing and tied up in red tape, looked like the future when we voted Remain in 1975. Since then, treaties including Maastricht and Lisbon have radically altered our relationship, severely diluting British sovereignty. The European Commission (with its over-paid, unaccountable bureaucrats) and the European Parliament (a rubber-stamping factory for Commission diktats) are now powerful entities in our national life. The UK is subject to many EU directives and treaty obligations, whatever our MPs think, and even though the 1975 referendum asked us only to stay in “the Common Market”. I think that’s wrong. 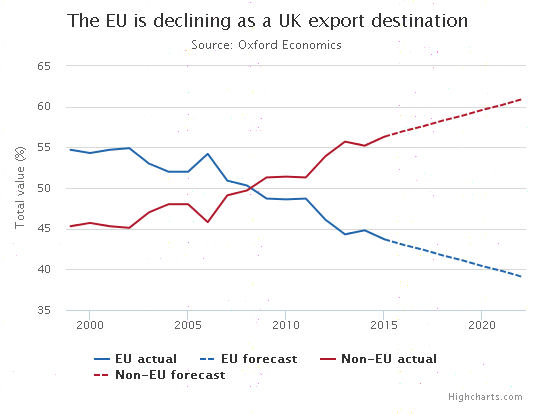 Yes, we must keep trading with the EU once we leave, and our £60bn trade deficitwith the bloc means powerful German auto producers, French wineries and Italian furniture-makers will make sure that happens. Trade with the EU will still matter, but in a more inter-connected world, with the UK specialising in “weightless” services and geography less necessary, Europe isn’t economically important enough for us to succumb to a deeply undemocratic supra-national political body in order to trade with it. And they’ll trade with us anyway.

I’m voting Brexit because, while there will no doubt be some economic uncertainty, I think we can manage it. The Treasury says households will be £4,300 a year worse off by 2030, with the OECD’s “Brexit shockwave” casting us into penury. Such “studies” are designed to scare voters. “Experts” at the Treasury and the EU-funded OECD bend to their political masters, as do almost all economists with cushy public-sector jobs, while the political future of both the Prime Minister and Chancellor hang by a Brexit thread.

When the euro implodes, the big EU economies – the UK included – will pick up the tab

The UK, free from onerous EU directives and the common tariff on non-EU imports, could grow faster. A Brexited Britain would focus more on trade with dynamic emerging markets in Asia and elsewhere. The EU suits big UK corporates, banks and professional firms, as Brussels-based lobbying and tortuous regulation keeps smaller challengers at bay. That’s why so many small and medium-sized firms accounting for much of Britain’s creativity and employment back Leave.

Brexit makes sense because “Europe” isn’t working. The euro, which “most economists” told us to join, is doing untold damage. Locked in a high-currency straitjacket, Greece and Spain are suffering 40-50pc youth unemployment. Italy, having barely grown since the euro’s 1999 launch, faces a major banking crisis. Unable to depreciate their currencies, such economies are being sacrificed on the altar of “more Europe”. When the euro implodes, the big EU economies – the UK included – will pick up the tab.

If we vote Brexit, other countries will likely hold their own EU votes. During our Article 50 negotiation, lasting at least two years, The Netherlands, Sweden, Finland and Italy could also vote to leave. Only then, faced with undeniable evidence of Europe-wide disdain, will the eurocrats be forced to move to a looser, less hubristic, more democratic EU, one focused on trade and co-operation between sovereign nations, not absurd nation-building appealing to bien pensant elites but derided by ordinary people. I believe in an EU, but not this EU. A Brexit vote would give electorates elsewhere the courage to say the same.

Then there is “free movement of people” – good in theory but, I’m afraid, in reality naïve and dangerous. Massive wage differentials between EU members have driven record UK net migration: over 330,000 last year, double that if gauged by new national insurance numbers. Hailing from a long line of Irish builders, I will always argue the merits of immigration. But when the pace is this fast and getting faster, though great for big firms and the wealthy, low-income working people suffer, their wages flattened. This isn’t about being “racist” or “stupid”, but being deeply insecure economically – something much of our media class will never understand.

During this campaign, the politicisation of the Treasury and, above all, the Bank of England has, in my view, been shocking. For extremely well-heeled ministers to scare poor pensioners into thinking they will lose their benefits if they vote Leave is unforgiveable. Equally despicable was last week’s Leave poster showing a snaking queue of brown-faced refugees. For the vast majority of low-income Brexit backers, concerns about immigration relate to economics and numbers, not race.

So an MP has tragically died, in an incident that may or may not be related to this referendum. Campaigning has, anyway, sunk further into finger-pointing and acrimony. The UK boasts a generally honorable and vibrant political culture – a culture of which I am proud. I only hope we can recapture it once this referendum has been cast.