EUA= Emergency Use Authorisation.
Lymerick VIDEO 2:20, bummer, it was Joe Public that said, ""We Are Killing More People Than We Are Saving." Doesn't make the claim false.
Another, Seawitch, Chelsea Clinton arrested, didn't happen.
.
Added 30,305 people died within 21 days of having a Covid-19 Vaccine. In England.
Transient muses: Are the spikes on exosomes nanotubes for blowing vesicles (bubbles)?
The Pentagon crime corporation has no cash to settle pay cheques come September 30th. Fid. Anna has the purse strings. Hence the push to advance the coup via Mr Trump, figurehead of the Pcc Inc.
The QFS system the Goguen gang are promising is the mark of the beast system, exemplified by the banks that are involved in it, the central banking crime sysndicate and the private JPM, HSBC etc. (Wall St.) that are constantly fined relative pittances (considered minor business expenses by the currency crooks) for their financial chicanery. The planet's gold is to be stored on the Moon, guarded by flying pigs presumably. I expect the PoS have the hologram tech from Fort Knox so peeps can rest assured their nation's gold is safe and sound. On the Moon. With all those aliens kicking the shit out of each around the Moon, we keep getting informed about by people that hear things normies don't. Would any sane person consider that a realistic option for other than cover for a massive heist?
No-one has noticed that the system Ms Goguen is fronting for Rothschild's KJM is a facet of the NWO corporation slave system. It involves everyone being chipped and branded. Did she mention that? Queen of the planet? Hmm. Aside from the fact bankers and UN corporation appointees have no power to appoint royalty and I doubt Rothy would let the title go to a woman, however queer.
Patriots? Or ordinary people tricked into inflicting the mark of the beast system by agents of the Satanist banking families and Black Nobility?
QFS - https://vigilantcitizenforums.com/threads/the-real-mark-of-the-beast-quantum-financial-system.7423/
The problem is, where is the backing for the banksters' QFS G/NESARA? Fid. Anna won't allow American property to be used to back the LGBTQ dollar nor will she allow it to be called the US dollar. The gold is another issue, the good lady demonstrated that the majority of it belongs to America. That leaves the military coup artists looking for funding. The crooked banks are broke and no FedRes magic money from thin air (taxpayers!) is allowed by the Fid.
The financial empire military's replacement federal (corporation) republic won't fly without a contract. Seems they'll have to bend the knee away from BLM and Antifa fascist savages and the sodomites they work for.

The governmental services corporation,currently pretended to be the Biden admin has a debt. They call it the National Debt and those that are employees or beneficiaries of the corporation agree to pay it. Americans that have recaimed their living American political status are exempt.
It currently stands at $29 trillion. How can that be? I call it daylight robbery. (The BoE is in on it.)
Think about it. We pay for everything, where does the money go?
.
The Dark Secrets in the Fed’s Last Wall Street Bailout Are Getting a Devious Makeover in Today’s Bailout
Counterpunch APRIL 2, 2020
BY PAM MARTENS - RUSS MARTENS 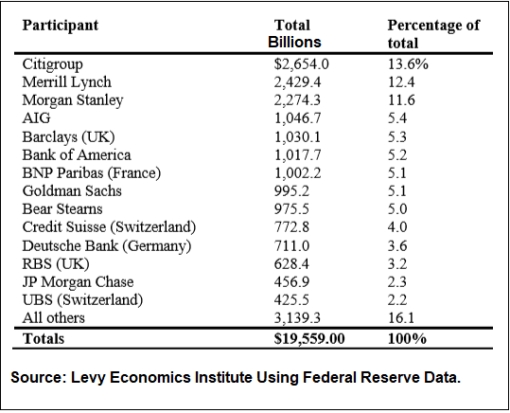 Largest Recipients of Federal Reserve Bailout Funds, 2007 to 2011.
.
From December 2007 to November 10, 2011, the Federal Reserve, secretly and without the awareness of Congress, funneled $19.6 trillion in cumulative loans to bail out the trading houses on Wall Street. Just 14 global financial institutions received 83.9 percent of those loans or $16.41 trillion. (See chart above.) A number of those banks were insolvent at the time and did not, under the law, qualify for these Fed loans. Significant amounts of these loans were collateralized with junk bonds and stocks, at a time when both markets were in freefall. Under the law, the Fed is only allowed to make loans against “good” collateral.
Six of the institutions receiving massive loans from the Fed were not even U.S. banks but global foreign banks that had to be saved because they were heavily interconnected to the Wall Street banks through unregulated derivatives. If one financial institution in this daisy chain of derivatives failed, it would set off a domino effect.
Another $10 trillion was spent by the Fed providing dollar swaps to foreign central banks, bringing the final tally of the bailout to $29 trillion. The Levy Economics Institute used the data that the Federal Reserve was forced to release through an amendment attached to the Dodd-Frank financial reform legislation in 2010 to compile the $29 trillion tab. Its figures are in line with the audit done by the Government Accountability Office (GAO), also mandated by the same amendment. The GAO audit included most, but not all, of the Fed programs, so its figures fall short of the comprehensive job done by the Levy Economics Institute.
There are two dark secrets about the Fed’s last bailout of Wall Street. First, the Federal Reserve Board in Washington, D.C., which is a federal agency with its Chairman and Board appointed by the President and confirmed by the U.S. Senate, outsourced the bailout to the Federal Reserve Bank of New York (New York Fed), which is a private institution owned by the Wall Street banks. The New York Fed, in turn, outsourced the management of the bailout to some of the very Wall Street firms that were receiving the funds. We know this from the details contained in the GAO audit. (See our “Vendor” section below.)
The second dark secret is that the underlying cause of the enormity of the bailout – hundreds of trillions of dollars in derivatives that interconnected the same global banks as counterparties – has never been reformed by Congress. A feeble attempt was made in the Dodd-Frank legislation but that was quickly repealed by an amendment forced into a must-pass spending bill by the largest recipient of the bailout – Citigroup, which was insolvent for much of the time the New York Fed was lavishing $2.65 trillion on it.
Continues: https://www.counterpunch.org/2020/04/02/the-dark-secrets-in-the-feds-last-wall-street-bailout-are-getting-a-devious-makeover-in-todays-bailout/
Cc