Still in progress. Added Rumors up to Sunday. (Sunday next post.) Read the Fulford readers' letters, Chabadists are behind the staged end times attempts. Let's hope Mr P isn't a Chabaddy.
Where are the white witches when you need them?
The utterances above Rumors will remain subject to correction as new intel arises.

I hope our Irish cousins and other relatives are paying attention to all this. The enmity between communities is artificially sustained for the satanists to inflame at the wave of a 'kerchief. One people divided and kept that way. A great evil has passed. Give it a break, upset them, make peace without using leaders. Men are idiots. A woman's work is never done.

Will history repeat? If the plunderers manage get an insurrection going, will you be fighting for the bankrupted and banished municipal service corporation or the bankrupted and banished territorial service corporation? For 18(?) years there have been three American governments, two were crooked service corporations pretending to be the National Government. The two corp'ns were declared bankrupt and ordered to vacate. Now there is only the real deal. The DoD Pentagon corp'n looks to be quite unhappy with the American people having a government of, by and for the people and disowning the corporation debt passed off as national, hence the pretence(?) that Trump is the 19th real President of America.
The DoD Pentagon corporation looks to be desperate to walk the corporation corpse because if it fails, its multi trillion dollar cash cow vanishes and its lost at sea Americans' taxes funded aggression for the benefit of corporations, (weapons, bank, oil, pharms, agriculture) the Crown Inc, the Vatican Inc and their Israel Inc. becomes financially unsupported.
It's always about the money.
.
Simple as I can make it.
The reconvened non corporation American Government of the people for the people needs people to advertise that it exists, is real and has been active in reconvening people's State Assemblies. The (original) 50 States where the Assemblies have been reconvened have made the corporation assemblies excess baggage and they have been given their marching orders, aka the thieving bums' rush.
Elections have always been for corporation presidents. Using bait and switch, the bankrupted DoD has declared the 45th services corporation president Trump to be the President of America. Votes for a corporation election have the same value as a fart in a hurricane to the actual American Government. Corporation statute law of the dead (Admiralty Law) has no force against non corporation employees and non dependents. With the corporations' contract terminated, I'm unsure whether such laws still exist. Americans that have not surrendered their rights to the corporations or have reclaimed their living political status are subject to God's Law and the Law of the Land, not statute law.
(Statute law=If you are obeying the law you are legal. Law of the land, God's law=if you are not breaking the law you are lawful and legal. Statute law, don't walk on the public park grass, fines apply. Law of the land, its your grass.)

The office of President of America is by appointment, not election.
Your non corporation, actual Government is trying to stop the DoD Pentagon controlled criminal Biden outfit transferring bonds backed by your (American) assets to China. It would be a good idea to give the American Gov. your support, here.

There must be a big place in the history books for the good lady. What she is doing, righting (and writing) the wrongs against the American people is exactly what any government for the people should be doing. Sadly so many countries have occupation regime corporations fooling and plundering the public. 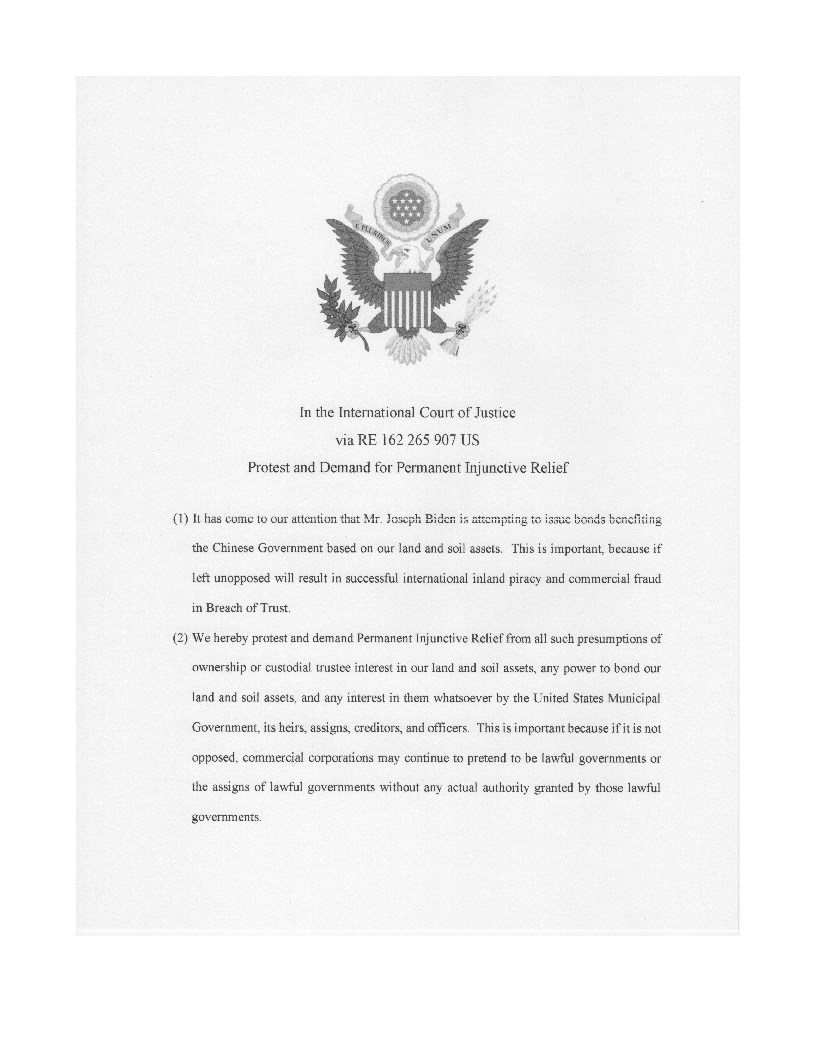 This is planned theft and an illegal transfer of ownership of massive proportions. If you don't wish to be forced to learn Chinese reclaim the rights you surrendered when you registered to vote in the corporation election, when you gave all your rights to a corporation representative.
The vote of those outside the corporation sphere of influence should not have been counted. Those that did vote took part in a fake election. The deligitimized corporations had and have no lawful right to conduct anything because all legal authority had been stripped from them.
Even were the votes legitimate, they would still NOT QUALIFY AS VOTES FOR THE PRESIDENT OF AMERICA. That office is filled strictly BY APPOINTMENT.
Why haven't the non Fed Corp'n Sheriffs arrested the fake president of the fake corporation for treason and grand theft nation?

1576. For All The State Jural Assemblies - 33 The American Civil War
The impact of the Constitutions on the States of America and on the member commercial corporations doing business under names styled like this: The State of Pennsylvania --- was dramatic.
The most important immediate change was that control of our fledgling Navy and our Naval operations was ceded to the British King, who was obligated to function as our Trustee on the High Seas and Inland Waterways, and to protect our private and international and commercial interests in those venues.
http://annavonreitz.com
Brits, your government is a corporation. It is bankrupt to the tune of the so-called national debt that is corporation debt. You agree to pay it when you give all your rights to a corporation representative by registering to vote. It's called a confidence trick and is fraudulent. Because the vacant Crown is a corporate entity that embraces the corporation government, when the Police swear loyalty to the Crown Inc, (Privy Council, Freemason sector leaders ) that includes the corporation government. Is it even possible for them to arrest and for the corporation tribunals (including the Supreme Court) deceptively called courts to prosecute the criminals?
We need a non corporation government ready to take over. The corporation collective of thieving, deceiving rats you call the government need to be evicted from our buildings. They are not our government, they are squatters. Their debts are not our concern. 2 million people around our Parliament buildings demanding they and their "civil servants" and advisors get out. To be polite, write to them first and tell them you have withdrawn your vote and you'll be along in the near future to help them vacate the premises.
Even without a non corporation replacement, we'll be far, far better off with them gone. All of them.
---0---
.
Rumors
"American ADRENOCHROME kid" sold in frozen bags
Three Critically Important Documents from Anna Von Reitz
"Russia Halts Diplomatic Relations With United States In Response To Declaration Of War"
Infowars Emergency Saturday Broadcast! World Shocked By SPARS 2025-2028 Document
.
( Collapse )
---0---.
.