.
The Truth Will Set You Free. So far you haven't had the truth from the news outlets.
Can someone officially complain to the Police that the corporation regime is virtually arm up the back coercing people to accept an injection of a substance that is not a vaccine, that contains particles of harmful substances and technology according to an assortment of reports, confidence tricking the public into believing it is a vaccine for a non existent deadly, infectious virus.
It can't be isolated because it is a psy-op.
The very fact full disclosure has not been made to the public as to the ingredients and their purpose and that they are experimental without justification according to the regime's own statistics is an infringement of the Nuremberg Code.
The people doing this are my servants. I am a living person unencumbered by contracts with the corporation regime nor the Police acting on their instructions, however illegal and or unlawful.
I'd complain in person myself but I'm not flavour of the month at the moment.
.
IMO if Mr Trump has behaved correctly and received a contract, he is in charge of a new Federal corporation. If he has applied for Presidency of the unincorporated American Gov, and been accepted, he is the actual American President. In either case much of the following will not be relevant. If it's the 3rd option, a coup by the military and by deception, well just more of the same old same old.
Luck to us all. Cc
---0---
.
Imagine you had elected the president of Walmart or McDonald's and because you elected him he now claims presidency of the country.
Presidential elections are for corporation presidents.

Mr Trump was elected as president of the two governmental services corporations masquerading as the USA Government. The corporations were declared bankrupt and given notice to quit. That is why the White House has been empty.
Is Mr Trump now being used as a front for the bankrupted Crown - Vatican Corporations' Department of Defense that has been running the country under martial law? This is the same Pentagon that was involved in 9/11, that is trying to start a war with Russia to rescue the broken central banks and open Russia to corporation plunder in Libya, Syria, Iraq and Afghanistan style.

Were Mr Trump to be truthful, or able to be truthful were he to be deceived or under threat, if he is truly America for Americans, he would apply to the actual American Government and its 50 - non Federal corporation - State Assemblies to be the actual President of America. Anything else is a coup. Actual President of America, unbound by Constitution rules is an appointment, not an election. General Flynn, after announcing Trump as the 19th President said, "...the Republic of the United States under the Constitution." (Link) The Constitution is the list of rules the service corporations must follow, and their dependents as employees and beneficiaries.

The service corporations no longer exist as corporations due to bankruptcy and dismissal for assorted criminal and incompetence reasons. Connect the dots. It looks like the Department of Defense acting without permission, without a contract wishes to continue running the country as a service corporation in its own right. The same DoD that "lost" 2 trillion, that destroyed country after country for private corporations and Zionists' benefit, and that has sought DoD hegemony over the world on the taxpayers' dime, that has "vaccinated" the foot soldiers with an experimental "vaccine" that in no way cures the fake  -COVID (Influenza) pandemic without waiting to see the side effects. Perhaps they know. Why would it want to incapaciate the lower ranks?

Here's some of the actual American Government's steps taken to dismantle the Crown - Vatican's plunderfest framework, e.g. the two corporation state of state assemblies are now under non corporation State Assemblies that are above the Constitutions. Americans that have reclaimed their living person, true political status are not subject to the Constitution's rules or the corporation federal - military tribunals masqueading as Courts.The abominable practice of turning people into 2 pieces of property (Crown claimed the body, Vatican claimed the souls) at birth has been reversed and outlawed. The overall deception of the West is such that it could only have been conceived by the Zionist Jews that control not just the corporations' political party (lobby) members but also the Vatican and they own the Jesuits (Freemasonry leaders) and the (German) Crown. The Great British are subject to the same privations administered by same people behind America's privations and disenfranchisement.
Check how many of your favourite news stations have told you the actual Federal service corporations' employer, the American Government is in session and has been for years now, kept hidden from you by the enemy within.

Here's the notice to vacate and some of the reasons for it, on official Government paper that pretender corporations could not and cannot use. The blank executive orders the DoD got Biden's left handed look-alike to sign on camera had no seal and the look-alike had less authority than the real imposter President, Biden (reportedly dead) to sign anything:
Source Public International Notice - Notice to Vacate http://annavonreitz.com/publicinternationalnoticetovacate.pdf 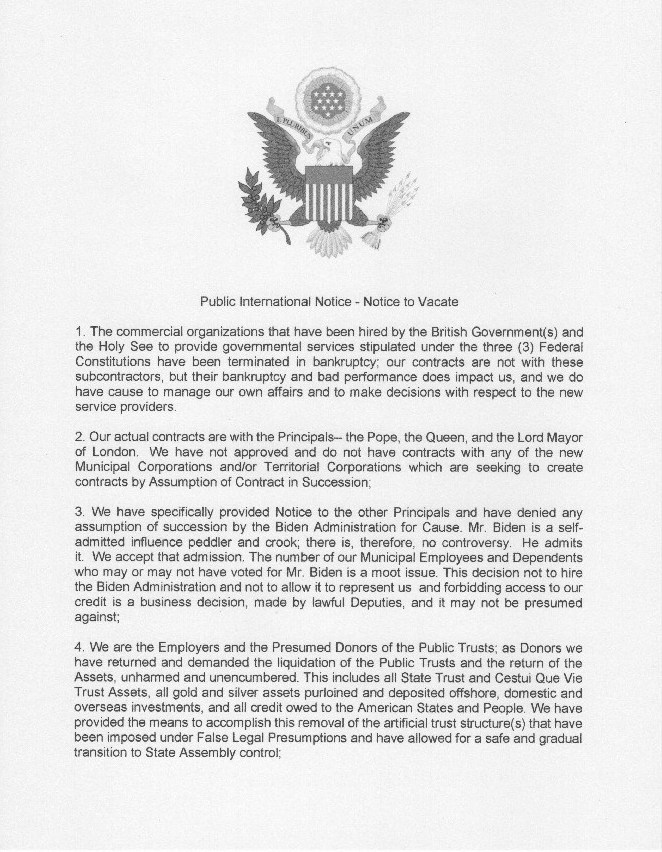 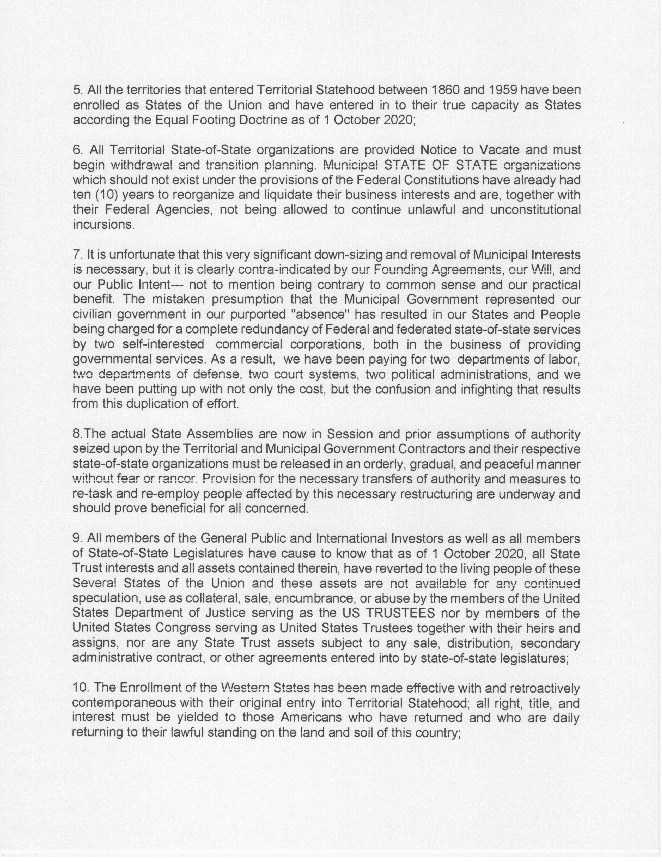 The Reign of Heaven appears to be a Zionist - Black Nobility's 5 eyes (DVD, Mossad, CIA, MI6 etc.) operation and or perhaps the Rockefeller Foundation that controls the UN and the CFR for the Pilgrims. (The Pilgrims - American and British are headed by the Queen.)
Participants in TROH bought an American flag at a Navy Yard auction and claimed to have taken the country. The flag that was on loan was sold illegally and remains the property of the (non Federal Corporation) American Government. They have been declared pirates by the American Government. The outfit has been busy bribing people to support its illegal claim to own the country with other people's funds illegally 'liberated' by the bankers. Receivers are highly likely to be unwitting participants in fraud and receipt of stolen property.

The big question is whether Mr Trump, when acting as corporation president knew and knows of all the fraud.

If this doesn't make you dizzy and angry, I don't know what will. Follow along the rabbit trail:
Black Rock, Inc. is a major shareholder in Microsoft.
Black Rock manages the G. Soros Open Foundation and Glaxosmithklein.
Glaxosmithklein owns both the Wuhan Biological Research Laboratory facility where the patented virus was developed and Pfizer, Inc., a vaccine manufacturer at the forefront of developing the mRNA gene therapy being passed off as a vaccine to treat the patented virus.
Bill Gates is a major shareholder in Pfizer.
.
Full circle insider trading. And not only that, full circle insider investment collusion, too---- and all against the Public Good.
Dr. Anthony Fauci developed the HIV-based portion of the patented virus that makes it super-infectious and gave the Wuhan Biological Research Laboratory over three million dollars in National Institutes of Health (NIH) grants.
Fauci is a contemporary and pal of Bill Gates, Senior. We have photos of Fauci, Bill Sr., and Soros thick as thieves.
.
So all these Rich Clods, Larry Fink, George Soros, Bill Gates, and Anthony Fauci, got together and concocted a classic Hegelian Dialectic Scheme --- they created the patented virus that caused the scare [The Problem], then also created the purported cure for their patented virus--- the mRNA gene therapy that they have knowingly misrepresented as a vaccine [The Solution].
Talk about drumming up business and unjust enrichment!
.
The purported virus vaccine doesn't produce antibodies to bulwark anyone's natural immune defenses against the patented virus, and thus far, those who have been 100% vaccinated are showing no different immunity profile than the rest of the population. Go figure.
It was never about health. It was about profiting from artificially created disease. And it was about exercising coercive racketeering power on an unsuspecting populace under color of law.

They profited themselves and their shareholders every step of the way at our expense. They sent us the bill --- misery, lockdowns, mask mandates, closed businesses, fear, separation, closed schools, disrupted families, trillions of dollars lost and spent on "pandemic relief" and for fake vaccine/gene therapy for something that shouldn't exist and wouldn't exist, if not for them scheming away in the background.

Now, all those of you who have been reading this and who now have a bird's eye view of how these pals and the corporations associated with them have colluded to enrich themselves at public expense--- what should be done with them and their corporations? And the politicians who allowed this to go on?
http://www.paulstramer.net/2021/04/the-spider-web-effect.html
PDF http://annavonreitz.com/spiderwebeffect.pdf
All this and one helluva lot more is explained in detail at the Fiduciary's personal web site and backed up here.

Anna keeps using "virus" yet here the good lady has described a manufactured bioweapon. I hope she is wrong about infectiousness. I'd like to see how the modified exosome is reproduced by people's red blood cells.

Can Someone ask Mr Trump as CiC why American forces are in the Ukraine helping the NATO - Bolshevik junta regime attack Russian Crimea, (the bridge) and the independent Ukranian states under Russian protection?
---
.
There are times I wish had my own web site again, but superior hack protection is offered by the Guardian, I mean Live Journal. However their aberrant auto format is a constant problem and so far their new editor is not an option without a full page HTML editor - till I'm obliged.
Cc
---
.
QUIZ. How many times has Russia rescued America?
How many times do they have to fool us before we wake up? Is it still possible?