Brexit Caused "The Great Reset" Scam-Hoax-Confidence Trick to be Unleashed Prematurely as the Snakes' Sacks Writhe to Neutralise the Spanner in the Works with the "Great COVID Pandemic" Scam-Hoax-Confidence Trick.
The 5G (60,000,000,000Hz range as used by HAARP) EMF radiation poisoning called COVID is being used as the excuse to destroy the economy to enable the imposition of banksters' crypto currency.

The illegal occupation regime sacks are in the process of mass murdering more of the elderly by LOCKDOWN while you sit there being brainwashed by the BBC traitors.

THE JOHNSON REGIME IS ILLEGAL.
GET IT OUT ASAP, PHYSICALLY IF NECESSARY.
Save our old folk.
If you didn't get to the Samuel Eckert Article via the 30-10 Supplemental, follow this link, translation and jump to the conclusion. If that doesn't convince of the falsity of the virus, a media staged con trick, nothing will.

Listen carefully to Corbett. He may not be a work of art to look at but his mind and presentation most certainly are.

Episode 387 – Your Guide to The Great Reset
Corbett • 10/16/2020 • 152 Comments.
You’ve all heard by now that The Great Reset is upon us. But what is The Great Reset, exactly, and what does it mean for the future of humanity? Join James for this in-depth exploration of the latest rebranding of the New World Order agenda and its vision of a post-human Fourth Industrial Revolution.
Notes, links: https://www.corbettreport.com/greatreset/
Commented:
( Collapse )---

We need petitions to get tax and privately funded biolabs (behind the weaponisation of exosomes our enemies have called coronaviruses) buried so deep they dare not resurface. Legitimate laws need to be passed to outlaw them. Court actions against them would help if an honest, non corporation court could be constituted.

I am reposting this article to remind everyone of how this same agenda has been pursued on other occasions --- always with the same end in mind -- a bioweapon disaster planned in cold blood against civilian non-domestic populations leading to forced, poisoned vaccinations, and government control of everything and everyone.
It's time these criminals were unmasked, arrested, tried, and hung.
( Collapse )
---
Plandemic. A Second Passover. And the Pied Piper.
Paul Stramer Lincoln County Watch April 5, 2020
By Anna Von Reitz

From Day One I have said that the Brits were at the bottom of the dog pile and pointed at the involvement of the Pirbright Institute and the Wellcome Trust in development of engineered corona viruses and their ownership of patents on "novel" corona viruses.
Bear in mind that this research is designed to enhance the Common Cold virus, to make the virus MORE infectious, MORE deadly, and then ask yourself what you think and feel about this pursuit and the people involved in supporting it?
( Collapse )
---

There are proposals in some military circles to divide our country into five regions, each with their own “President”.
Such an idea is a thinly veiled attempt to bring in the UN Regional Government model and is an action seeking to undermine the sovereignty of the States and People of this country.
Anyone promoting this is a traitor and is promoting insurrection against the lawful government of this country.
( Collapse )
http://annavonreitz.com/nofiveregions.pdf
http://www.paulstramer.net/2020/10/no-five-regions-agreement.html
Emphasis and a link added
Reminder: The global regime corporation's mayoral global tax regions, city states, Zionist Babylonian style.
https://globalparliamentofmayors.org - I wonder how Wales, Scotland and NI are carved up? Under Nicola's fishy administration, I suppose Scotland is already wet fish on a slab.
We left the EU? Why do we still have (and pay for the administration of) EU tax regions? 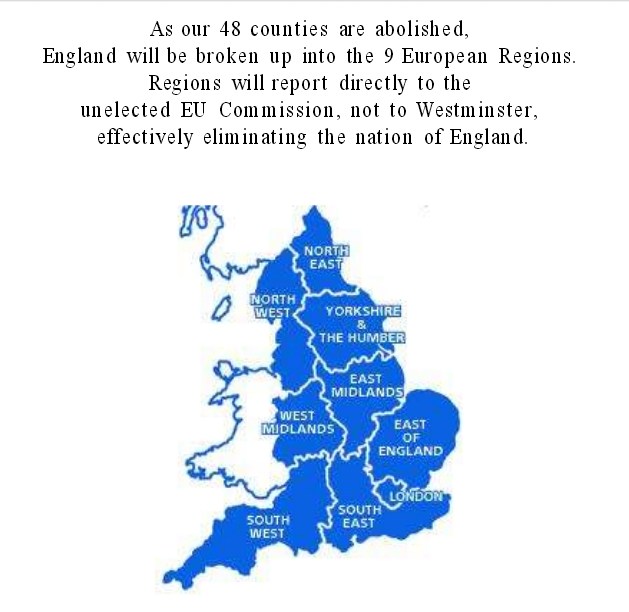 ---<<<0>>>---
Mass murdering Johnson regime continues to decree murder by 5G non ionising
microwave radiation poisoning aka COVID by imposing  nonsensical lockdowns.
The chuckle f*ckwits avoid each other like they are a plague on humanity.
Will the elderly in your family be murdered by you obeying these sacks of excrement?