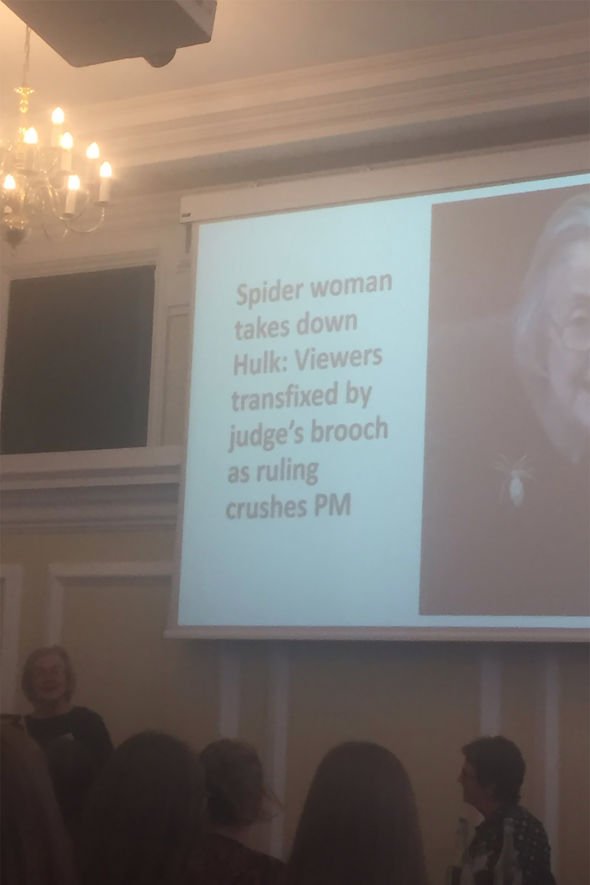 IMO. A so-called judge that has brought democracy into the realm of masonic control outside of government confesses to urinating on the will of the british public, on the government and on justice. The SCOUK (inc.?), laughably formed to replace the HoL authority supposedly to separate politics and law has demonstrated that corrupt politicians and biased judges can overthrow democracy. That is a challenge to the public, a wake-up in your face call to the extent of IJ EU corruption and desperation as it faces economic and political collapse. We are fighting an enemy within government, parliament, the Civil Service, the masonic justice system, all bureaucracy down to local councils and the remnants of public services. The gavelbang of (Masonry controlled) judges must be considered an instrument of our enemies.
---

Far be it for me to tell a PM how to operate but at this stage the intelligence services' bosses must be called before parliament to identify any MP that is NOT;

a DVD or any other intelligence service asset,
a serving intelligence agent,
a dual passport holder (not just israeli)
a friend of Israel
a zionist,
a satanic masonry member,
a known paedophile,
a known blackmail victim,
a communist,
a fabian,
a Bilderberg participant,
a member, supporter or proponent of the illegal jesuit OWG,
a bribery recipient,
a traitor,
a substance or alcohol abuser.
a beneficiary of insider trading,
an undeclared employee of any bank or other corporation

We would be left with a handful. Something to build on, a british government rather than an occupation regime.

Dear Baroness Hale, the European Commission is a criminal operation that has been proven beyond doubt by the late Christopher Story. Where do you get your idea of justice from, brussels sprouts? Does the law have something to say about a criminal operation funding a court?

A sitting parliament can legislate against an incoming PM's stated mandate, supported by a court that is funded by a third party (the IJ EU) that has financial interest in the outcome. What is to stop it legislating the nation to cease to exist, that is the desired outcome of the legislation?
Only us. And the constitution.

How much more of the brass plated bovine excreta will the mushroom public be fed? How much more will it swallow?

Dear Boris,
Talking of bovine excreta, how much longer will we be forced by the mafia's tax collectors to pay carbon tax, a poll tax based on deception and fraud (similar to the zBBC licence)? How do we get a refund? Perhaps via the Supreme Court?

The diet of CO2 driving the climate, a now a proven beyond redemption FRAUD is still the only justification for the carbon tax that is used to finance the illegal OWG, presumably via the foreign office > IMF donations.
(Have any of the billions or trillions in tax funds donated to the private IMF corporation produced a return?)

My Gift To Climate Alarmists

Youtube. Premiered Sep 20, 2019
Tony Heller
This is my most concise expose of climate fraud.  Please pass it around to everyone you know and your elected officials. The video is short, but cuts right to the heart of the matter.

It does not get better.

Mirrors and Mazes: Dr Howard Brady
Dr Howard Brady returns to The Chris Smith Show to talk more with Chris about the climate debate, take questions from listeners and take a closer look at the scandal about how dodgy satellites are giving false sea level readings. Aired 15th February 2017.

Dr Howard Brady
- Alumnus Scientist of the Year, Northern Illinois University
- Undertook four expeditions to Antarctica with the US Office of Polar Programs.
- Dr Brady is the author of 'Mirrors and Mazes: A guide through the climate debate’
Source: https://www.youtube.com/watch?v=FL35r5XE5to

I believe that any administration that bases taxation on proven fraud is committing fraud.
.
Biggest thanks to those that produced the videos and Rebecca.
Collapse