Syrian Army Detains French, British, Belgian, Dutch, Qatari Officers in al-Quasyr
TEHRAN (FNA)- The Syrian troopers detained dozens of foreign officers in the restive al-Quasyr region, sources said on Tuesday, adding that most of the detainees were from France, Britain, Belgium, the Netherlands and Qatar.
http://english.farsnews.com/newstext.php?nn=9202242820 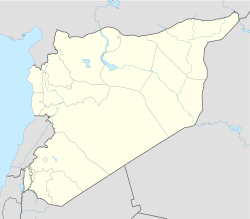 Al-Qusayr is a city in western Syria, administratively part of the Homs Governorate. It is located about 35 kilometers (22 mi) south of Homs and is situated in a mountainous area overlooking Syria's border with Lebanon which 15 kilometers to the southwest. Nearby localities include Rablah and Zira'a to the south, Jandar further to the east, Dabaa to the northeast, Arjoun to the northwest and Aqrabiyah to the west. Al-Qusayr has an altitude of 540 meters (1,770 ft).
A Muslim majority city with a significant Christian minority, al-Qusayr had a population of 29,818 in 2004 according to the Syrian census. In addition to being capital of the al-Qusayr District, it is also the administrative center of the al-Qusayr nahiyah ("subdistrict") which consisted of 60 localities with a collective population of 107,470 in 2004
http://en.wikipedia.org/wiki/Al-Qusayr,_Syria

According to reports the eastern side has been secured.

Al Quasyr has been reported as the local operations planning centre for Western and ME terrorist, insurgent and jihadist directors. The main HQ is said to be in Qatar, previously thought to be the NATO base in Hatay Province, Turkey, known to be a landing point for weapons from the CIA in Benghazi. The recovery of the city from terrorist, jihadist and insurgent gangs will be a major set-back for bilderberg-NATO specimens. It has been used as a portal for reinforcements, weapons and currency provided by Syria's enemies. Following on from the video of a terrorist killing a rabbit with chemicals whose containers showed UK and French writing, and the more recent video of a terrorist cannibalising a soldier, the loss of Al Quasyr is adding to a catalogue of propaganda disasters for the bilderberg regimes' supported coup attempt by approximately 50% non Syrian fighters directed by non-Syrian controllers aided by the various globalist subject spy agencies.

As with Libya, the nation has a non Rothschild usury mafia run bank, has large hydrocarbon reserves, is against the Israeli regime and is part of the planned greater Middle East with a central government controlled by bilderberg luciferian zionists like the EU. It is also a close ally of Iran that the Israeli regime pretends is a threat because of its civilian nuclear energy project. Iran is also envisaged as becoming subject to ME central government subjugation by violent overthrow of its government.

Cameron and Hague, free mason bilderberg subjects and the zionists in the EU and US regimes are ardent supporters of the mafia controlled world government plot. The (German occupied) crown and its very probably related (via bastard offspring) Rothschild family appear to be kings of the castle in the Weishaupt plan to impose a world government by stealth. Worship of lucifer is endemic from the leadership down in Western nations. Extensive institutionalised child abuse and sacrifice is a feature of the globalists with homosexuals, socio-psychopaths and perverts preferred for important offices. The upper hierarchy of the various public institutions and services have been subverted and the major media outlets controlled. All banks that practice fractional reserve (currency creation aka inflation aka fraud) are willing conspirators. Syria has become a major stumbling block to the progress of the NWO agenda. It was perceived as easy prey to the globalist hawks, Israel firsters, corporate and zionist run Chatham Hse, CFR, PNAC, Pentagon, ECFR etc on the road to Iran. The terrorist hordes directed by the covertly privatised secret services (CIA owns companies, charities, media, Rothschilds own the UK set) are being decimated. Not so many terrorists left to invade Iran, also a severe setback for the planned chaos in Iraq (Kurdish bid for autonomy).

What else is going on? Homeland Security, the US version of the SS in WWII Europe with the NSA, FBI and CIA filling the role of the Gestapo is being supplemented with UN forces being flown in to multiple locations, presumably for training and integration as a prelude to the full installation of a police state under globalist martial law. The EC may repeat the exercise with EU forces in the UK if the luciferian zionists feel threatened.

Back to Syria. Today's Al Qusayr news.
Main Al-Nusra Front Commander Killed in Qusseir Clashes
TEHRAN (FNA)- The main commander of the al-Qaeda-linked al-Nusra Front was reportedly killed in clashes with the Syrian army in the Western city of al-Qusseir.
http://english.farsnews.com/newstext.php?nn=9202242980

Battle for Qusayr: First Stage Ended Successfully, Second Stage Launched
Syrian Army continued Wednesday its military operation in the northern city of Qusayr and the rest of its countryside.
“Army units were able to restore security and stabilization to the Akkari Farm and Tal Sarr, along with chasing militants in Hamidiya town of Qusayr countryside,” state-run  news agency SANA reported.
Also in the border town, SANA said that tunnels have been detected in the western quarter used by terrorists to move and store weapons and ammunition, in addition to dismantling dozens of improvised explosive devices planted by militia militants inside citizens’ homes and on public highways in the city to prevent the progress of the Syrian courageous army.
Citing high rank military sources, Al-Manar TV correspondent reported that first stage of Qusayr operation has been ended successfully on Wednesday and the second stage has just been launched.
Qusayr city lies on the northern Syrian border with Lebanon, where terrorist groups and armed opposition gunmen are located.
Militants from Lebanon were detected Tuesday entering the Syrian territories to fight by the side of terrorist takfiris against the regular army. However, many of them were killed.
The Syrian Army launched on Sunday a large-scale operation to clear the area of terrorist gangs and liberate the citizens stuck there.
http://www.almanar.com.lb/english/adetails.php?fromval=1&cid=23&frid=23&eid=94589

The private CFR (US foreign policy dictators) think tank approved Muslim Brotherhood, US and other nationalities laughably called the "Syrian National Council", from a Turkish hotel -
“SNC” Urges Opposition Fighters across Country to “Rush to Rescue" of Qusayr
http://www.almanar.com.lb/english/adetails.php?fromval=1&cid=23&frid=23&eid=94529

Kerry Admits Syria Gains in Qusayr, Urges Assad to Commit to Peace.
http://www.almanar.com.lb/english/adetails.php?fromval=1&cid=23&frid=23&eid=94629
Now the zionist neocons' terrorists and AQ are losing and badly, thousands of Iraqi and Yemeni AQ and Taliban eliminated, Israel is threatened, they want peace? In Assad's place, what would any man of honour do?

Homs News Network
https://www.facebook.com/homs.news.network.english
Denial of army storming Al-Qusayr by terrorists
The spokesman of the so-called "Syrian (Terrorist) Revolution" in Al-Qusayr has told France 24: The Government's Army was unable to advance one meter, and I repeat yes not one meter inside the City of Al-Qusayr, and the "rebels" killed 55 fighters with 40 "Hezbollah Guerrillas" and 15 soldiers of the Government ...
[Got his info from Coventry by any chance?]

Al Qusayr - Army blocks infiltration into city
Syrian Army Units have ambushed an Armed Group of Terrorists in the "Chamsine" area as the attempted to infiltrate into the City of Al-Qaseir, killing 2 and wounding several

Al-Qusayr - Al-Nusra Front military commander killed
A Military source in Al-Qaseir has announced the death of the Military Commander for Al-Nusra Front Terrorist Organization in Al-Qaseir, along with 35 Armed members of his Gang during a successful Military offensive launched by the Syrian Arab Army together with the "Popular Committees", who led the battles from a depth of 10 meters underground, in addition to seizing sophisticated weapons made in Britain with Laser technology ..
The Military Source stating that "the battle in Al-Qaseir has become a foregone conclusion in favor of the Syrian Arab Army."

And Breaking News Syria
The army in response to the arrival of fighters for «al-Qusair-Relief»: We wait
Media sources have revealed of collapse in the ranks of armed militias in al-Qusair city following the fierce battles that revolve with Syrian Army amid confirmations about the “dread” of “Free Army” militia in a number of areas towards al-Qusair.
Lebanese newspaper Al-Akhbar quoted talking about information 'dismay' of 700 militia gunmen in Yabroud city wrt al-Qusair, following the announcement of al-Qusayr coordination all distress calls launched by the «Mujahideen of al-Qusayr» to brothers «Ahrar al- Qalamoun». Other News newspaper quoted the exit of more than 400 armed men from the villages of Aleppo and Raqqa to support the 'brothers', after the Syrian border guards thwarted an infiltration attempt by gunmen from the area of Wadi Khaled, Lebanon.
The newspaper pointed out that this news raised wry smiles among the elements of Syrian Arab Army and its officers, where comments like: (We are waiting).
Sources from inside the city expects 'cleansing' during the short timetable of a week, with field leaders confirming that the 48 hours initially capable of causing the city to fall, and this fall to reflect negatively on the militias inside and around the city of Homs through weakening their armed fronts in neighborhoods, particularly with their reliance on al-Qusayr City in the delivery of weapons from Lebanon.
It is expected that the al-Qusayr-track battle directly securing the city of Homs, then the direction of the fighting in the north to restore al-Rastan to take into consideration that al-Qusayr is the strong flank for logistics supply line to the town of al-Rastan. In addition, the results of al-Qusayr fall will extend to the armed militias in al-Qalamoun, in terms of loss of communication between the south and the north, ensuring not to cut international highway connecting Damascus in the north and the Syrian coast again by the gunmen, and cut supply routes between the capital and the Northern provinces.
http://breakingnews.sy/en/article/17822.html
Collapse