UK gov - a terrorist and terrorist supporting regime, the only gang the UK should fear?

A stage in the attempted subjugation of the world population is total control of national populations under puppet governments. Part of that agenda is the implementation of a police state that is at an advanced stage in the US, the UK is behind schedule. Not a big worry for the psychopathic megalomaniacs that pull the strings in the UK, i.e. the crown, Rothschilds, other globalist bank and corporation families, some aristocracy and assorted other parasites, because the UK was defanged under the traitor Blair.

Control of internet is a major objective for the megalopsychos. Another, access control points on major highways (disguised as toll booths) and 100% monitoring of the population. Per capita the UK has more cameras watching people than any other country. Once spy meters have been installed in every home, major events will be detectable ahead of time, like mass rallies where a large number of households suddenly stop watching TV or using the PC, they will be identifiable by address. The police have been distanced from the public. Major newspapers and radio-TV channels are controlled, many directly by the secret services that have people in place, by owners, editors and CP graduates, using fear of dismissal or worse, and via membership of the Rothschild world army, the free masons and by membership of bilderberg, an agency of the "300" that created the EU's Nazi political system, e.g. Rompuy is or was a bilderberg steering committee member, Cameron and Hague are subscribers.

So why the theatre in Woolwich? The megalopsychos have been thwarted each time they have tried to gain overall control of the internet via the UN, via the EU's EC and via national legislation. The latest stunt is via the secretly arranged Trans Pacific Partnership Agreement, (see here) but that doesn't include the UK. What is a poor puppeteer to do? Looking at the way the Sandy Hook stunt was used to give the US gun control some momentum and the Boston bombing theatre used to introduce totalitarian control of the city, the staged murder in the UK is being used in an attempt to force acceptance of national internet control primarily, also ongoing reduction of freedom of movement and then there is the SNAFU in Syria, the coup attempt is going belly up, it is becoming common knowledge that the UK regime, particularly Cameron and Hague, are aware that they are funding terrorist cannibals, beheaders and rapists, so Woolwich is also a distraction to get Syria off the front page. The illegal FSA led insurgency is partnered with the (CIA's) AQ in the Levent under al Nusra's flag, the (CIA's) AQ franchise LIFG and a host of takfiris from all over. Many bandits are involved in the FSA as exampled by the constant battles over stolen loot, auctions of it in captured towns.

From The Tap (link) - Tory ministers bid to revive the snooper's charter after Woolwich attack
All too often in recent history, governments have used terrorist attacks as a pretext to further erode civil liberties, so David Cameron was rightly commended for his declaration yesterday that there would be no "knee-jerk" response to the events in Woolwich. In the hours after the murder, John Reid, the former Labour home secretary, Lord West, the former security minister, and Lord Carlile, a Lib Dem peer and a former government reviewer of counter-terrorism, all argued that the attack demonstrated the need to revive the communications data bill or "snooper's charter", which was excluded from the Queen's Speech after Nick Clegg's intervention. But Cameron's words reassured liberals that the government would not be pushed into hasty legislation. To invert Tony Blair, the rules of the game have not changed.But on last night's Question Time, Theresa Villiers, the Northern Ireland Secretary, suggested that she and others are more sympathetic to the calls from Reid and co. She said: I'm very supportive of legislation on communications data, I think it would help us in combating terrorism. Elsewhere, today's Independent reports that Theresa May, who has previously accused opponents of the bill of "putting politics before people’s lives", is "determined" to act. A Tory tells the paper: "The Home Secretary is very keen to do something shortly that includes at least some of this Bill. I suspect any opportunity to strengthen pressure on the naysayers will be taken. She is absolutely determined to do something on this."www.newstatesman.com/politics/2013/05/tory-ministers-bid-revive-snoopers-charter-after-woolwich-attack

Cameron and Hague are traitors working for unelected concealed parties to subjugate the UK and further the global government agenda. There is sufficient evidence e.g. chem trails, the latest major incident was over Chester a few months back, Syria like Libya is a Western instigated, armed and funded coup attempt using imported terrorists, the national debt caused by debt currency is a fraud committed by successive governments complicit with the BoE, major bank houses and every bank that practices fractional reserve currency creation, fraudulent membership of the unelected EC political system where ceding sovereignty is treasonous, and giving it UK public purse money (VAT) is theft, the deliberate deterioration of the health system, destruction of the existing culture and social standards by immigration flood, porn and extreme violence on TV, politicisation of, low standards and false teaching in education, institutionalised child abuse, the CO2 fraud used to increase unemployment by destroying the industrial foundations and as justification to funnel wealth into private accounts (wind farms, solar panels, green banks and charities), and out of the country ("loans" to dubious regimes in developing nations, green boondoggles in the EU and UN), deliberate creation of destitution and homelessness, and on and on,  that the regime should be brought down and many members jailed for protecting child abuse and in general for acting against the interests of the UK public with many instances of treason. In short, parliament is a fifth column of traitors knowingly or otherwise.

The UK is among the richest in the world, the country hemorrhages wealth. There is no need for unemployment, poverty, homelessness, cold deaths or an inadequate health system except by design. Libya shared its wealth from natural resources directly with its public, parts of Canada still do. The UK tripartite regime gives it away to private parties and foreigners.

Many in parliament are Rothschild-crown free masons. Kissinger, a free mason admitted that their religion is worship of lucifer. Freemasonry is also a front to shield child abusers and murders. 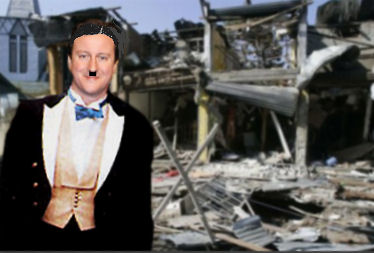 (From "Cameron to celebrate victory with Bullingdon-style trashing of UK")
The traitor Blair with the Queen's permission and house majority backing changed the law so that hanging was no longer the punishment for treason. Can someone arrange a petition to repeal that law?
.
Tags: blair, cameron, freemasonry, hague, rothschild, tpp, treason, woolwich
Subscribe
Previous
← Ctrl ← Alt
Next
Ctrl → Alt →
Previous
← Ctrl ← Alt
Next
Ctrl → Alt →